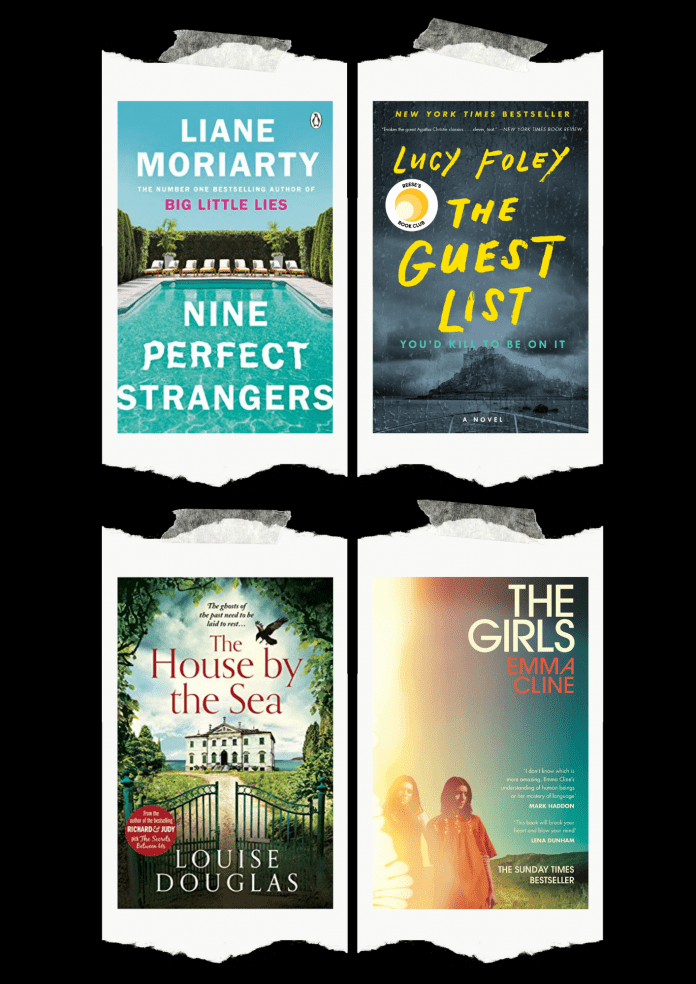 With holidays abroad looking very unlikely for this summer, I’m sure we could all do with some distraction; a little bit of escapism so that we can pretend we’re actually somewhere hot and sunny rather than (for many of us) rainy old England. Although, it’s 20 degrees outside as I type this, so maybe it will be that little bit easier to imagine ourselves in some of these sunny settings. What better way to fill the monotonous days than to fill them with murder mysteries? People with bigger problems than our own will certainly make a welcome change.

Pack your bags and put your shades on, because the first destination we’re jetting off to is sunny Australia. More specifically, a slightly suspicious ‘wellness’ resort in New South Wales. Nine Perfect Strangers by Liane Moriarty is the first book on the list, and possibly my favourite. Although a silent retreat that you cannot leave will perhaps hit a little bit too close to home, you almost won’t be able to resist the temptation to book one of your own by the end of it—just out of morbid curiosity. Although it’s quite a lengthy novel at over 400 pages, the number of different perspectives and the slowly building tension make it fly by. I read it in less than 2 days; I just couldn’t put it down. The plot revolves around a wellness guru who may not be everything that she seems, and the trials and tribulations that she puts her customers through in the name of tranquillity, as well as a number of secrets that the nine very-likeable characters are attempting to hide from each other. It’s ever so slightly bonkers, in the best way possible. Moriarty’s writing style is delightfully witty throughout, but there are some truly tender moments scattered within, alongside some points of intense stress. And if you can’t get enough of it once you’ve read it, you’re in luck: a miniseries based on the novel is expected to come out on Hulu sometime in 2021, starring several familiar faces, such as Nicole Kidman. Enjoy!

Okay, so The Guest List by Lucy Foley doesn’t quite fit the tropical theme I was going for. It is set on an island; just one off of the Irish coast, rather than somewhere a bit sunnier. It still counts! The wet and windy weather creates a gorgeously creepy atmosphere throughout, and as all of the characters are trapped on this tiny island for a wedding, it’s the perfect cosy thriller for lounging on the sofa during one of April’s many showers. It’s another multi-perspective story and while almost all of the characters are pretty unlikeable in their own special ways, there are a few gems who stick out amongst them. Mainly Olivia; I spent most of the time just wishing I could give her a hug. But the other characters, they’re unpleasant in a manner that makes them all the more ridiculously entertaining to read about. Warning: there are quite a few rich people problems within this book. However there are definitely more serious issues, such as mental health and bullying, addressed as well. The story begins with the death of an unnamed party and then unfolds from there, entwining past and present as motives are discovered and the big day approaches. Foley includes several twists in the narrative, some shocking and some that you could maybe see coming if you’re shrewd enough. I’m certain they’ll all have you hanging off your seat waiting to discover the culprit and their victim. Fans of cold weather, appreciators of a gothic setting, those of us who fantasise about having a stupidly over-the-top wedding: this one is definitely for you.

The House by the Sea// Louise Douglas

Although there were never any hugely scary or gruesome moments in Louise Douglas’ The House by the Sea, it was still so eerie that there were times I refused to get out of bed while reading it, in case something got me on my way to the bathroom. At first, it seems we’re just following our main character (Edie) in her day to day life. Which honestly would make a great book in itself: Edie is painfully relatable, even if her use of ellipses truly grinds my gears. However, she soon receives a summons to Italy from beyond the grave. Or her ex-mother-in-law, Anna’s, will. Here, Edie and her ex-husband must uncover the secrets of Anna’s family home and track down a missing priceless painting, all while trying to come to terms with their own pasts. Obviously, there are some juicy romantic subplots. But that’s not even the best part. The descriptions of the setting were so vivid and gorgeous that you will truly feel as though you’re there; sunning yourself in Italy and maybe being stalked by someone strange from the nearby town. And perhaps getting involved with the mafia, because this is Italy and why wouldn’t you? I’m not joking; at least one of the characters in this book was a member of the mob for reasons that weren’t particularly clear. This is a charming thriller with loveable characters and enough suspense that you won’t want to put it down, as well as the added bonus of a free European holiday.

The fourth and final book on the list is The Girls by Emma Cline, which takes place in California in 1969. Sounding familiar? Before I get into it, let me just warn you that the main character is 14 during much of the action. As a result of this, there are several moments of utter cringe, and also a few scenes that are quite uncomfortable to get through, although I don’t think there’s anything majorly graphic. Which is surprising, seeing as the storyline is heavily influenced by the Manson family. That’s right: this book is all about a cult! Whilst The Girls could maybe be considered a coming-of-age story rather than a thriller, the impending sense of dread throughout as you tensely await the horrors that you know are coming, means that it’s just right for this list. Dread is heightened dramatically by the flips between past and present, and there’s something almost equally as sinister occurring when Evie (our main character) is an adult. The atmosphere of the novel is so real it’s almost claustrophobic; I was reading it in mid-February and still felt like I was overheating, and Cline’s description is so vivid that you can almost smell the setting around you. Another very well-written, enthralling novel.

And there we have it! Four thrillers to take you on a tour of the world; covering three different continents and just about every single one of my favourite thriller tropes. In terms of plot types, there’s something for everyone: a cult, a maybe haunted house, murder amongst friends, and a deranged spiritual retreat. The characters span all ages as well, so there’ll definitely be somebody in there that you can relate to. All of the books are superbly well-written, and once you’ve started reading, you won’t be able to stop until you’ve solved the mystery. So even from your bedroom, the world is your oyster…

This article was published as part of The Indiependent‘s May 2021 magazine edition.