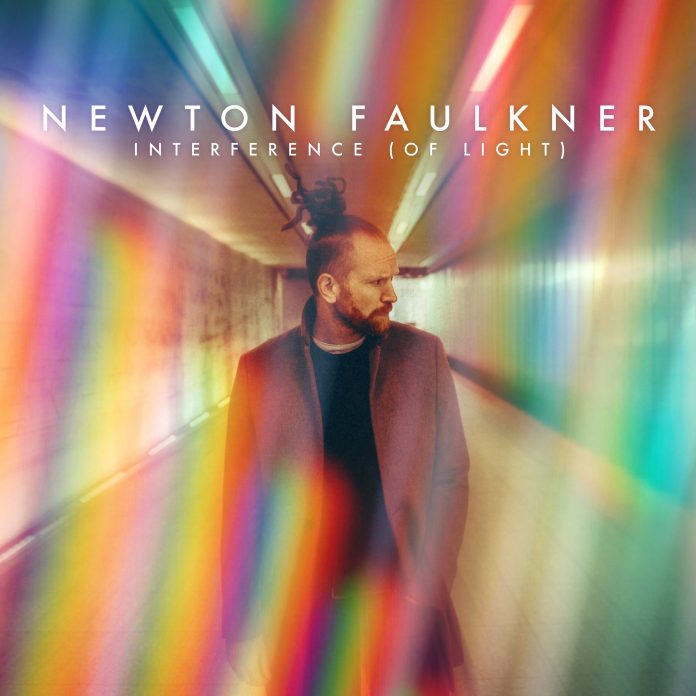 “Escape the chains / Break out of this way of thinking / Do I see a change or am I hallucinating?” Newton Faulkner springs into self-reflective lyrics in ‘Sinking Sand’, the opening track on Interference (Of Light). It’s a shot of positive energy, which pairs well as a soundtrack for a busy weekend morning. Despite the newfound challenge of recording in an isolated environment in the past year, the artist’s seventh studio album is an optimistic collection full of relatable lyrics.

Featuring previously released singles ‘Better Way’ and ‘Four Leaf Clover’, Interference (Of Light) offers an entirely new experience, with a curated tracklist according to each medium. The streaming version consists of the full 17 tracks, uninterrupted. The CD in turn is a tailored listen from start to finish with interludes. Finally, the vinyl sequence includes a reduced number of tracks as to not sacrifice the quality of sound. It’s clear that the creative process didn’t finish with the writing and recording but continued all the way through production.

Interested in the behind the scenes of this album? Read our interview with Newton Faulkner here.

Interference (Of Light) isn’t over-produced and it’s not caged into one genre; it blurs the lines between folk, indie pop, and alternative rock. The vocals feel present and personal, especially on tracks like ‘Here Tonight’ and ‘It’s Getting Late’. Likewise, the lyrics don’t shy away from exploring a vulnerable side to the singer.

At times, some of the tracks seem out of place in the album as they’re quite muted in comparison to the rest, but they do offer a break in the otherwise dynamic album. That’s not to say that the quieter tracks stay buried amongst the high-drama pieces. ‘It’s Getting Late’ contains creative guitar sequences that force you to hold onto the notes and hyperfocus on the lyrics. With chilling and thoughtful lines like “There’s a time to fight and there’s a time to hide from demons out in the darkness,” it’s easy to get lost in it.

Now as for which tracks stand out above the rest? ‘World Away’ tops the list. It begs to be played on full blast as you fly down a motorway on a road trip and leaves you feeling infinite. The track is quite nostalgic, reminiscent of that moment in The Perks of Being a Wallflower when the characters drive under a bridge free of all life’s constraints. The entire album has catchy hooks, but it is this track that cements Newton’s composing abilities; the grand string progressions steal the spotlight.

The cinematic application doesn’t stop there, though. ‘Interference’ the final track belongs in the closing credits of a drama series. As Newton himself said: “It just sounds like a complete vibe” and he’s not wrong. From beginning to end the instruments melt into the lyrics leading into an edgy guitar solo. Frankly, it could go on for minutes and no one would complain. Nestled among these standout melodies is also the hidden gem ‘Killing Time’. Uplifted by percussive instruments, it’s a fanfare of a song.

Above all, Interference (Of Light) attests that risks do pay off. While there are clear references to older albums —the conversational elements akin to number one hits like ‘Write It On Your Skin’, come to mind— the majority of the album pushes boundaries and hosts many offbeat unexpected twists.