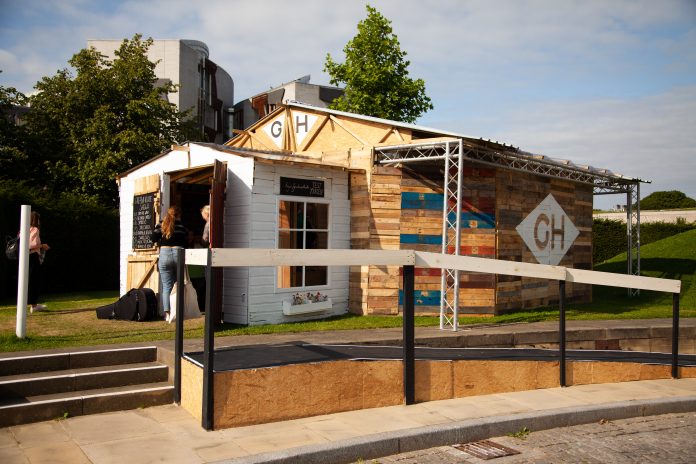 In The Greenhouse Theatre’s adaptation of Shakespeare’s As You Like It, the set strikes you as soon as you walk in. It is a shelter away from the skyscrapers of Canary Wharf and general bustle of the city. Like the fictional forest of Arden, where the play is set, it feels like The Greenhouse Theatre aims to be a natural utopia and that effect is achieved through the small, intimate space, fairy lights and minimal natural decoration.

The venue seats no more than maybe 30, and they sit in a circle around the performance space. The audience felt like part of the performance, which was partly due to the staging, but also the engaging ensemble of actors. They constantly involved the audience, asking questions and making eye-contact. The small cast of seven young performers brought a youthful, passionate energy that this performance needed. The relationship between Rosalind (Eliza Harris) and her cousin Celia (Ayesha Milner-Glover) was particularly enjoyable and relatable. The excitement and gushing over young crushes felt familiar and I was reminded of similar moments with friends.

At moments the cast had slip ups, even at one point forgetting the scene, but it was covered quickly by a joke with the audience. This was done particularly well by Fred Rawicz, who played Touchstone. The breaking of the fourth wall, which happened throughout the performance, brought a slight reprieve from the focus that Shakespeare often requires, and created moments of brevity that are apt for a Shakespearian comedy. It also demonstrated the familiarity and love of the performance that the cast so evidently felt.

The light-hearted nature of the show was only bolstered by the folksy soundtrack running through the performance, giving it an almost camp-like vibe. At times it evoked childhood memories of theatre—small, intimate, interactive and minimal. Whilst not always perfectly in tune, the songs certainly created a community vibe, particularly between the cast. It was almost a shock to walk back out into the city, which is a testament to the transformative effect of both the set and the actors.

When I spoke with the artistic director of The Greenhouse Theatre, Oli Savage, he hoped that the audience would appreciate the magic of nature through the timelessness of story-telling. I can say that is certainly evident in this performance. Everything about the set evoked an appreciation and awe of natural environments, whilst engaging the audience in the classic comedy.