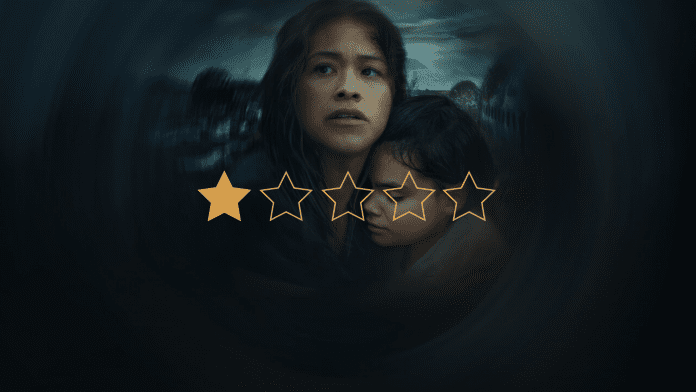 Some movies are just not worth anyone’s time, and Awake simply doesn’t make the cut.

Directed by Mark Raso, Awake is set in a world where suddenly people are not able to sleep anymore. Jill (Gina Rodriguez) is a laboratory security guard and mother to one of the only people in the world who can sleep, Matilda.

The acting stands out as the first of the film’s many disappointing aspects, with the actors (ironically) sleepwalking their way through this mess. At no point are you convinced that these people actually need to sleep. For the most part, they just seem bored. Even those moments meant to capture the hysteria brought on by sleepless nights are delivered with little energy, in performances so dull you might wonder whether these actors ever actually had a sleepless night. In one scene, Jill’s teenage son Noah (Lucius Hoyos) is looking at shooting stars. Jill points out that those are actually satellites falling out of the sky, her monotone delivery failing to do justice to the potential wonder or beauty of the situation. Perhaps this is a conscious acting choice; a lack of energy is typical of sleep deprivation. However, when the material is as shallow as the script here, you cannot help but despise such decisions that deprive the audience of at least some form of entertainment.

The writing compounds Awake‘s shortcomings. Though the acting makes Awake too boring to be derided, what makes the movie outright terrible rather than simply mediocre is the script’s refusal to explore any of its themes in a meaningful way. Unlike Untrue or Insomnia, which masterfully explore the subject of sleep deprivation, the plot of Awake could have remained essentially the same with another premise.

The sleeping element adds nothing, because there is apparently nothing noteworthy to say about it. Instead, you are treated to a slew of the same tired tropes. For instance, the protagonist is the only one who know what is really going on, courtesy of information the rest of the world doesn’t have. Because Jill is a security guard in a laboratory, she is told what is going on before the rest. This completely drains the film of tension, and seeing Jill having to figure out what was going on would have been more interesting. Additionally, the “chosen one” dynamic centred around a little girl is painful in its predictability. Yet, even taken as is, the ending could have provided some relief had it given an interesting reason as to why Matilda is able to sleep. Instead, the reveal takes out what little drama Awake possesses, leaving the whole picture feeling like a waste of time.

Up until now, this might sound like an acceptable movie to doze off to. However, its technical faults make it unbearable to witness. Yhe cinematography tries to land some memorable shots, but it simply falls flat, as do the appeals to visual metaphors which bear no impact on you as you watch them happen. While clearly inspired by masterpieces like Children of Men, surreal imagery without meaning comes off as pretentious, redefining this movie from unsuccessful to outright atrocious. That is, when you are actually able to see anything at all. The second half of the film is often too darkly lit, especially if watched on a laptop. The car scenes, which make up a substantial portion of the movie, suffer particularly badly as a result. The general colour grading also feels off, with an atypical blue tint overused in thriller films as it is proving remarkably uninteresting.

As its only saving grace, there is nothing openly offensive about this movie’s message. On the flip side however, this is endemic of how Awake is a film that refuses to be shaken from its slumber, never straying from beyond it’s dull, poorly executed comfort zone.

Awake is too boring for a hate-watch and too shallow for anyone to pretend to like it. It is a wannabe internet sensation that has no business being on anyone’s watchlist and, unfortunately, sticks out as one of the worst Netflix originals there is.

Awake is available to watch on Netflix now.