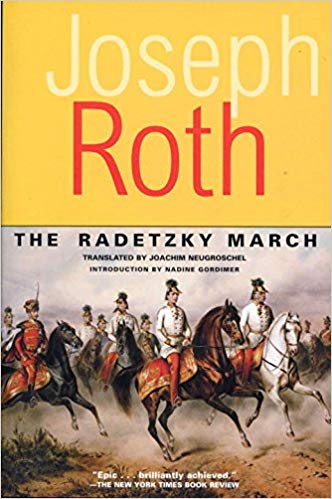 What Do I Think Of It?:If you’re a long-time reader of mine you’ll know that I’m a big fan of 20th-century European literature: my favourite author is Fallada (German), the book I last read was by Francoise Sagan (French) and the book I’m looking at today is by an Austrian about the Austro-Hungarian empire and its collapse. The Radetzky March begins with an ignominious Slovenian lieutenant named Trotta saving the life of the young emperor of Austria at the Battle of Solferino. Trotta becomes ennobled and promoted for this act, and the book follows the three generations of aristocratic Trottas that live through the reign of the emperor Franz Joseph, from Solferino to the assassination of Franz Ferdinand in Sarajevo in 1914 and the beginning of the First World War, which would result in the collapse of the Austrian empire. The themes of decay and death are expertly woven throughout the novel – the moral decay of ordinary life clashing with the aristocratic, archaic notions of honour and glory in the institutions that uphold the empire, most predominantly in the life of Carl Joseph, the youngest Trotta, a misfit in the army his grandfather thrived in. By the time the wealthy Pole Chojnicki declares that the empire is crumbling to Carl Joseph, the reader has sensed the doom that Chojnicki has picked up on. The theme of internal conflict is also a big part of the novel, with the Trottas themselves often clashing in character and intentions as the various nationalities making up the empire rebel against Austrian rule outside of the house, while the working classes rise up against the aristocratic ruling classes. Of course, all of this eventually comes to a bloody head that I won’t spoil. What Roth does best is create a sense of foreboding, yet he still manages to create emotion at the event itself. What I would say is that it takes time for Roth to really find the thread of the novel, and the first 100 or so pages following the elder Carl Joseph, the hero of Solferino, and his son Franz drag on in setting the scene. The novel only really takes off when Carl Joseph the younger comes of age and is sent off the join the cavalry.

Would I Recommend It?: Yes, but it’s not an easy read. A book charting three generations while also trying to show the gradual decline of the Austro-Hungarian empire at the same time is inevitably a bit overwhelming at times, and the switches between perspectives from Franz von Trotta to his son, to Emperor Franz Joseph, then to Carl Joseph again can become tiresome at some points. If it is stuck with, however, The Radetzky March is a powerful portrait of decline and fall, showing how a world can fall to pieces obviously enough for some but remain perfectly intact to the eyes of others. There are few comedic moments, the foreshadowing is heavy and the tone is often gloomy. That is what is needed for a book like this.