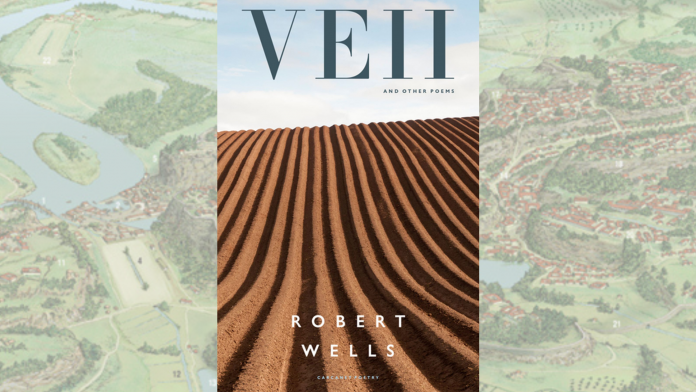 Robert Well’s Veii And Other Poems, might seem an odd collection, in that its titular poem is embedded near the end of the third section. Yet, once you have read through to it, Veii’s position amongst those other poems begins to make sense. For this is not a collection focused on one memory, or simplistic thematic flow. Instead Wells’s poems speak to a range of themes even as they are bound by a singular voice.

That voice is defined by perspective. For each of these poems focuses on returning to memories. It might be rather trite of me to link into Wordsworth’s maxim that poetry is emotion recollected in tranquillity, yet this collection gives some credence to the idea. For Well’s poems, with their lightly worn depth of knowledge, could not have been written by anyone else. These are personal poems that take potency from their long gestation.

I must say that in picking up a collection with a name that focuses on an Etruscan city just outside of Rome, I expected a certain level of Latinate focus. Instead, I was pleasantly surprised by the more direct inclusion of Greek mythology. Here you will see mention of “Pegasos” rather than the ubiquitous Latinisation of “Pegasus”, and it is the hero “Herakles” rather than “Hercules” whose visage is another focus of ekphrasis.

Such linguistic focus alone, although is not of that much interest to any but the most diehard classicist (and even then, they might suggest that early italic coins might well be representing the Etruscan “Hercle” rather than the Greek form of the same hero/god). But such focus on word forms belies a deeper love of subject, and it is that passion that gives life to topics in Veii that might otherwise be staid and overly detail oriented.

It takes great skill to turn a litany of description, and descriptions of static coins no less, into poetry that grips the imagination. Wells, as a master both of form and style, balances the imagistic nature of his recollection with an assured confidence that is almost enthralling. In reading The Coin Cabinet I was left thinking that no other poet could use repetition to such an extent without verging on ridiculousness. Such structured poetry could easily feel forced, yet here Wells layers memory into each new image and so builds a narrative.

That narrative is strong enough that it gives a sense of innate cohesion to a collection of poems that range from multiple section poems of multiple stanzas, to short 4-line poems. The myriad of structures mirrors the nature of life, and memory. Some events are complex and demand long explanation, whereas some of the most pertinent memories are mere snapshots, fragments that tell just as much by their incompletion as by any detailed description.

It would of course be wrong to think that those shorter poems, being mere snapshots, rely only on the force of memory to gild them with meaning. For instance, one of my favourite poems of the collection, Group With Laptop, is just fourteen lines long. Yet within those lines Wells is able to question the very nature of art, attention and conscious interpretation.

It is by blending allusions to art and myth with a deep knowledge, and most importantly knowing which allusions and information will be most effective at translating the ineffable nature of memory into word-bound understanding, that Wells is able to slip profoundly resonant thoughts into poems that feel as open and obvious as if they were laid out in front of the reader with the clear lines of some Roman temple with its perfectly proportioned Corinthian columns.