Before 2011, all people generally thought when they heard the name Matthew McConaughey was: “ooh he’s the rom-com guy” or “he’s the hot guy Failure to Launch, Ghosts of Girlfriends Past etc”. Since 2011 however, we have seen a complete change in McConaughey’s career, taking on more serious roles that has seen him become one of Hollywood’s most sought after actors. Many people have cleverly dubbed the change in his career the ‘Mcconaissance’, and in this feature I will take you through 5 of the acting roles that have become integral in the ‘Mcconnaissance’.

Mick Haller in The Lincoln Lawyer (2011)

This was the film that really kicked off the ‘Mcconnaissance’, a role that made me look at McConaughey in a very different way. Going into it, I wasn’t expecting much, the plot sounded good but I had always been sceptical about McConaughey previously; boy was I wrong. In The Lincoln Lawyer, McConaughey plays defence attorney Mick Haller who begins to be suspect of his client, believing him to be linked to a crime he had previously dealt with. This is the first film where we see McConaughey really develop emotionally as an actor, we see him not just gunning for the affection of a women, but we see a moral battle and the strength of a man’s love for his family. This role was certainly the first of many that would begin to shape McConaughey’s career and send him in the right direction, the first real time he stood out as being a top actor for me.

If The Lincoln Lawyer was anything to go by, I knew that Killer Joe was going to be good, by the time I’d watched it, I had begun to take McConaughey seriously.My guess was he would continue to impress; I wasn’t wrong. What we saw from McConaughey in The Lincoln Lawyer was a man forced into a corner who became violent, in Killer Joe, he is completely the opposite. The way he acts and goes about his business were reminiscent of American Psycho’s Patrick Bateman, his attire: the leather jacket, leather gloves and cowboy hat with the sunglasses make him look like a psychopathic cowboy, which for me made the character of Killer Joe even more appealing. The infamous KFC chicken leg scene is one that really brought McConaughey’s brutal side out, a very impressive performance that for me really looked like a man who knew how to be a top character actor, much like Christian Bale in American Psycho. Despite Mud being focused on McConaughey’s quest for love, it is not his typical romantic type of movie. Mud is a tale of redemption, for once, McConaughey’s quest for love fails him, but it’s the relationship he forms with youngsters Ellis and Neckbone and the lessons he teaches them and in turn they teach him, that make for great viewing. To see McConaughey play a character so damaged yet make it appear so effortless with that Texas charm of his is refreshing, as we see the McConaughey of old mixed in with the McConaughey of new, which combines to make Mud such an interesting and complex character. McConaughey keeps the viewer on edge all film, and we begin to feel some kind of emotional connection with Mud. He becomes a kind of anti-hero really, someone who despite being an obvious criminal, the viewer loves and roots for against those who oppose him. I truly think Mud is one of McConaughey’s more likeable characters and it was another defining moment in the ‘Mcconnaissence’. 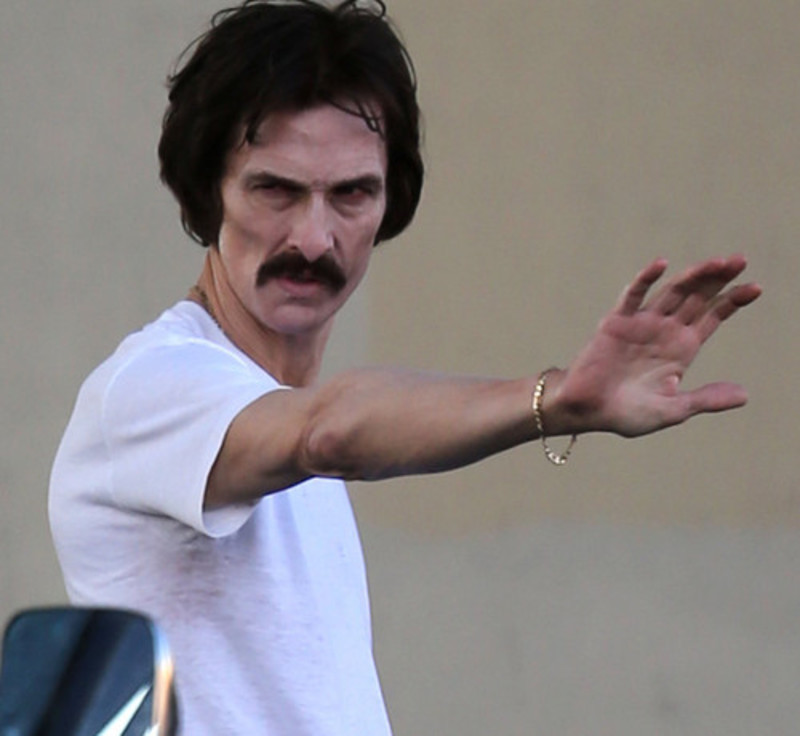 Without a doubt, Matthew McConaughey’s best film performance to date, deservedly winning him numerous awards, including the coveted Best Leading Actor Oscar. Playing real life AIDS sufferer Ron Woodroof, McConaughey created a real tear-jerker of a film, but most importantly, he represented the great man Woodruff was, and made Dallas Buyers Club a real testament to his legacy. What made this performance even better was how the character of Ron developed during the film, from the homophobic cowboy we see at the beginning to the compassionate, caring hero we see at the end. His relationship with Rayon (Jared Leto), a transsexual fellow AIDS sufferer becomes a real friendship, and the fact that McConaughey lost real weight and worked so hard to appear realistic made this so much more impressive and believable. It can be said that this film was the ‘Mcconnaissence’ finally hitting it’s peak, with McConaughey as mentioned before, winning the Academy Award for Best Leading Actor for this role, beating the likes of Dicaprio and Chiwetel Ejiofor. By far McConaughey’s greatest achievement in film, and certainly the defining moment. After his Oscar success, McConaughey’s big break came in the form of the lead role in Christopher Nolan’s sci-fi epic Interstellar, as a father and NASA pilot on the mission to find a new habitable planet for humans. Nolan was clearly looking for star power for this film, and because of the ‘Mcconnaissence’, McConaughey is now a big star and sought after by many big directors. Nolan’s Interstellar was definitely one of the best films of 2014 (a personal favourite) and McConaughey was a big part of this. His performance as Cooper was excellent, not exactly Oscar-winning material but still a top performance. McConaughey’s excellent on-screen chemistry with Anne Hathaway was stimulating, but most importantly in this film it was the emotional bond between Cooper and his kids, especially Murph that really impressed. A bond that stretches over galaxies and reaches the deepest emotional boundaries. This film takes McConaughey into a role he hasn’t done before, a scientific engineer, McConaughey admitted he had to do a lot of research for this film and frequently quizzed scientist Kip Thorne on the theories of the film. Despite his inexperience in films like this, McConaughey really flourished and hopefully he will appear in more roles like this.

As well as the ‘Mcconnaissence’ changing his film career, McConaughey also had a very successful time playing Detective Rust Cohle in HBO’s True Detective, which saw him pick up several other awards. It is clear that since he ditched rom-coms, Matthew McConaughey has become one of the best actors around. If he stays the way he is, will be a force to be reckoned with for years to come.