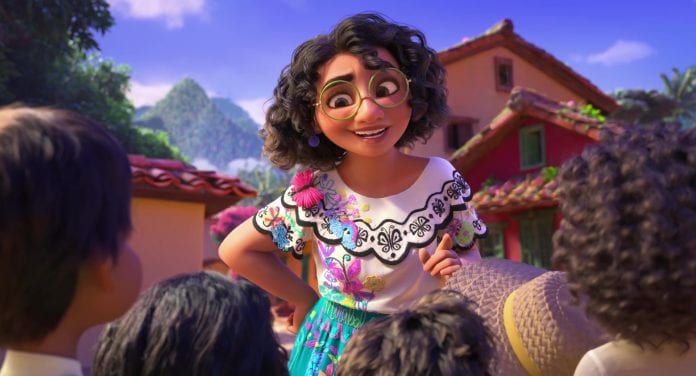 Disney have released the first teaser trailer for their upcoming animated feature Encanto.

The film, the third Disney animation this year after Luca and Raya and the Last Dragon, centres around the Madrigal family. They live in the hills of Colombia in a magical town called Encanto (meaning charm in Spanish).

It stars Stephanie Beatriz (Brooklyn Nine-Nine, In the Heights) as Mirabel, the only family member to not have any supernatural abilities, as she must step in to save the family’s magic. At this point, not much further is known about the plot, but this first teaser promises a visceral and colourful tale, full of magic, wonder, and a celebration of Latino culture.

Beatriz told Deadline that “Mirabel is a really funny, loving character who also deeply yearns for something more. She’s also not afraid to stand up for what she knows is right — something I love and relate to very much. I’m Colombian on my father’s side, and playing this role fills me with immense pride.”

Alongside Beatriz, the film hosts the voice talents of many notable Latin American actors including Diane Guerrero, Wilmer Valderrama, and Maria Cecilia Botero.

The film features eight new songs from Lin-Manuel Miranda, in his second collaboration with the studio after Moana. Miranda has also worked alongside Alan Menken on new songs for the upcoming live-action adaptation of The Little Mermaid. Outside of Disney, he has penned songs for Sony Animation’s upcoming musical Vivo, in which he also plays the lead character.

Encanto is set for a 24 November 2021 release date, and will be the first Disney or Pixar animated film to go directly to cinemas since the pandemic started. At this point it is unclear whether the film will be simultaneous release on Disney+ as has happened with the recent releases Cruella and Black Widow.