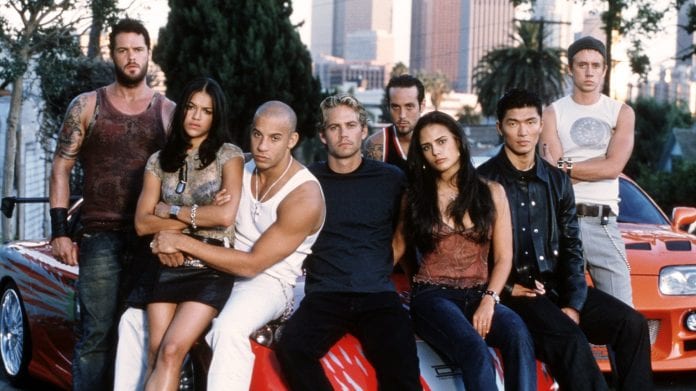 Fast & Furious 9 (or F9) will be released into cinemas almost exactly 20 years since the Fast Saga first started with The Fast and the Furious (2001).

It is remarkable that a low budget street racing movie has spawned the seventh highest-grossing movie franchise in history. Even more so when you consider that the films aren’t based upon a successful series of books or comics. Nor has it taken several decades to establish its reputation. It went from a film about ten-second cars and off-hand comments about tuna to an action-packed, world-saving set of adventures with at least half the logic and twice the silliness of any other franchise around. So, why is Fast & Furious now such a behemoth in the cinematic world?

Improvising and adapting are key to Fast & Furious’ success. The series was forced to change because it didn’t have an identity going past the opening film. Universal envisaged a single movie, centred around Brian O’Conner (Paul Walker) infiltrating a Los Angeles underground street racing scene led by Dominic Toretto (Vin Diesel). When the paltry budget of $38m generated returns topping $200m, the challenge—especially given Diesel opting out—was to recreate the success. The studio repeated the street racing storyline twice more. The story moved to Miami for 2 Fast 2 Furious (2003) and Tokyo for The Fast and the Furious: Tokyo Drift (2006) with all-new casts, albeit Diesel did briefly appear in the latter.

With the third film a commercial and critical disappointment, Universal decided to relaunch with the original cast. They gave us the first true sequel to the original with Fast & Furious (2009), radically changing the look of the franchise in the process. The movies have always retained a heavy focus on cars but have remained fresh due to their genre-bending abilities. The storylines have evolved from street racing to battling drug lords, to international spies and thwarting terrorists. As a result, Fast & Furious has muscled its way into the ring with heavyweight franchises like the Mission Impossible and James Bond films, matching these established brands for scale and action. So much for a quarter-mile at a time.

One of the successes of Tokyo Drift is how it made more money from the international box office than the USA domestic market. With a Taiwanese-American director in Justin Lin (who would become a Fast Saga regular) and featuring a mainly Asian cast, it tapped into new markets and demographics.

This cultural representation has continued, with a multi-ethnic cast and the diversity of its directors. Walker stands out as the only recurring white male protagonist in a cast that includes Korean, African-American, Israeli, and Brazilian actors. Most importantly, these are not bit-part roles – they are a key part of the ensemble that we have come to regard as family. It is difficult to think of any other mainstream franchise that features the same diversity among its leading cast.

This diversity has translated into success, with popularity amongst ethnic minority audiences driving box office takings. On the opening weekend of Furious 7 (2015), the most successful film in the franchise to date, 75% of the film’s US audience was non-white.

The movies may have embraced cultural diversity, but they have been slower to improve the representation of women. The early installments reek with as much machismo as Dom’s sweat-soaked white vests. Many of the films also contain some uncomfortable sexism in the use of low slung camera angles panning through scantily clad female racegoers like a Pirelli calendar shoot. The films are also guilty of placing female characters in atypical, damsel in distress moments that make them out to be weak, such as when we are introduced to computer expert Megan Ramsey (Nathalie Emmanuel). On other occasions, the lead women have often been killed (or assumed to be) to further male motivation, reducing women to the role of emotional battle fodder. All of this highlights how women have occupied a lesser presence in the films to date. Despite having one of the strongest female roles in the films, even Michelle Rodriguez called out the movies in an Instagram post in 2017.

Letty is a tough and competitive woman who challenges many of the gender stereotypes seen in early instalments, and her romantic relationship with Dom is very much a match of equals. Having Charlize Theron as the primary antagonist in The Fate of the Furious (2017) and a side-villain in F9 is also helping to readdress this balance, and a female-led spin-off of the Fast Saga is currently in development. Even so, Fast & Furious has some way to go before it can claim to have moved beyond the arguably outdated role of women in its storylines.

One of the most enduring and endearing aspects of the Fast franchise is its relatability and the concept of family. Yet, there are very few instances of ‘normal’ family life in the films. Here, the concept of family represents a thicker-than-blood bond between the main characters. For all the evolution in the storylines from street racing to saving the world from doomsday weapons, the fanbase return because of their attachment to Dom’s family. Like all great film franchises, the audiences keep returning because of the strength of this central unit of characters (the Toy Story and Harry Potter films are other examples).

With a growing cast and the untimely death of Walker in 2013, the movies have continued to nurture the idea that this diverse group will do anything for each other. There is the invisible string of trust that binds the group, a trust that the at times stunning action choreography throughout the films does well to highlight.

The tenderness that characterises the closest family units is particularly relevant to the bromance between Dom and Brian. For movies full of masculine stereotypes, Dom and Brian’s relationship breaks down many of them. For instance, Dom explains the circumstances of his father’s death and openly displays fear to Brian at the thought of driving his father’s Dodge Charger. This is a crucial moment in the pair’s journey to becoming more open with one another, in a way that betrays the stern and impenetrable shield of hyper-masculinity found thoughout the films. Their path leads to a tearjerker of a scene at the end of Furious 7, the emotional impact of which is only heightened by Walker’s death. The relationship that began with a street race ends with one before, at a fork in the road, Dom and Brian bid farewell for the last time.

All great sagas need some kind of heartfelt centre, and the Fast Saga is no exception. Ultimately, it is not the adaptability of the storylines, diversity or the strengthening of female roles that will draw audiences back to F9 and beyond. It is Family. As Dominic Toretto himself puts it in Fast Five (2011), “money will come and go. We all know that. The most important thing in life will always be the people in this room. Right here, right now.”