Not long ago, and in a galaxy not too far away, a second teaser trailer for Star Wars, Episode VII: The Force Awakens was released, as part of the three-day long Star Wars Celebration event in California. The film, directed by J.J Abrams, is set some time after the events of George Lucas’ original trilogy and stars a range of faces, old and new, including Domnhall Gleeson, Daisy Ridley, John Boyega, Oscar Isaacs, Mark Hamill, Carrie Fisher and Harrison Ford.

Now, if the last teaser – which debuted in November last year – didn’t quite whet your appetite for some more intergalactic action, then this latest trailer might just be your salvation. Drawing on every sense of nostalgia it can, this two minute clip gives us some ominous Skywalker history, an earful of that classic musical score by John Williams and a sneaky glimpse at not one, but two of the franchise’s most beloved returning characters.

The teaser starts with a wide shot of a ship racing across a sand-ridden landscape. Though it looks a lot like Tatooine – the former home of both Anakin and Luke Skywalker – Abrams has revealed this week that it is actually a new planet to the franchise called Jakku. As the racer – who is assumably Ridley’s scavenger heroine, Rey – speeds across the sand dunes, a single forlorn horn can be heard playing the infamous ‘force theme’. 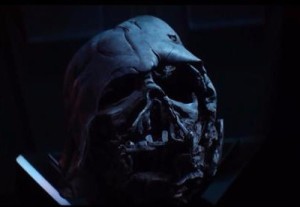 We then cut to black, and the wistful, older voice of Luke Skywalker can be heard, reminding us of the franchise’s wealthy history. ‘The force is strong in my family, my Father has it’, he says, as the eerily powerful image – brought to life by a single, raspy gasp – of Darth Vader’s mangled, burnt out mask sits in an unknown location. We then see a kneeling, hooded figure sat in front on a fire, besides everyone’s favourite droid, R2-D2. The figure, as confirmed by Luke’s omnipotent narration (‘I have it’), appears to be Luke, who settles his mechanical hand gently on R2’s head. And then we get a poignant glimpse of what is presumably Leia (‘My sister has it’), handing over a lightsaber to a faceless person.

Skywalker’s narration then ends on a strangely ominous note – “You have that power too” – and we are treated to a sequence of new scenes, featuring unseen glimpses of some of the film’s newer characters. We see Oscar Isaac’s fighter pilot, Poe Dameron, whooping as he glides his X-Wing across the sky, as well as Adam Driver’s villainous Kylo Ren – armed with his wicked-looking double-edged lightsaber. We also get a better look at Boyega’s character Finn – who is seen both running from an explosion and emerging breathlessly from beneath a stormtrooper helmet. There is, as yet, still no look at Domnhall Gleeson’s enigmatic character, but the trailer is full of enough explosions and “pew pew” shooting noises to keep the action-lovers occupied.

And even if all that isn’t enough for you, the teaser trailer ends with one short, but very powerful final shot, when Harrison Ford reclaims the screen as Han Solo, and cheerfully states to his lifelong wookie companion; “Chewwie, we’re home”