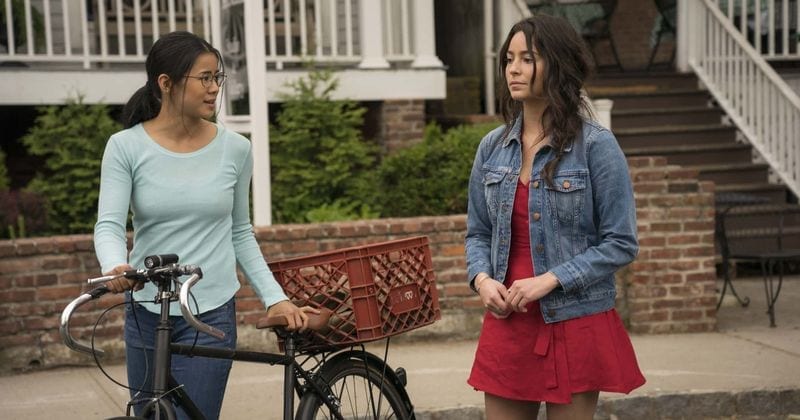 Written and directed by Alice Wu, The Half Of It follows the story of cynical brainiac Ellie Chu (Leah Lewis)  as she helps hopeless romantic Paul Munsky (Daniel Diemer) write love letters to the enigmatic Aster Flores (Alexxis Lemire). But don’t be fooled- this isn’t your average teen rom-com. This is a movie that elevates platonic and familial love and highlights how it can impact our sense of self just as much as romantic love.

Growing up in the small religious town of Squahamish, our protagonist is expectedly lonely and isolated. Ellie is the daughter of a Chinese immigrant whose PhD in engineering is of little worth when paired with his small grasp of English. This critique of life for immigrants in America is arguably out of place for a teen movie, but arguably adds an extra layer of characterisation to Ellie, as well as reinforcing her sense of isolation in the backwater town. It also shows that teen romance films don’t have to be mindless money-makers, but can actually address important and relevant cultural issues in a way that young audiences can relate to.

A key highlight of the film is the friendship that develops between Ellie and Paul. Though originally Ellie helps Paul due to pity and desperation, she- like the audience- quickly comes to value his big heart and ditzy demeanour. The two show each other great kindness and quickly become close friends. They each raise the confidence in the other, highlighting the importance of platonic love through their encouragement of each other’s passions. The movie becomes less about their love for Aster, and more about their love for each other- which Wu cleverly uses as a plot point when wires get crossed. Paul states at a late stage in the movie: “I always thought that there was one way to love. One right way. But there are more. So many more than I know”. Thanks to Wu’s storytelling, this line has so many layers of meaning. It applies to all the different kinds of love shown in the film, not just Ellie’s love for Aster.

Though the film has quite a few filler scenes and awkward moments that seem out of place in the narrative, it also has shots and motifs that redeem those moments. Wu carries the themes of knowing and identity strongly throughout the film, as well as beautifully representing the feeling of longing that us folk in the queer community are very familiar with. Critics seem to be divided by the ending, but it’s well done. It’s hopeful and it highlights the movie’s most important message.

Though far from a perfect film, The Half Of It is an uplifting narrative that highlights the importance of friendship and leaves you with a warm fuzzy feeling in your chest.