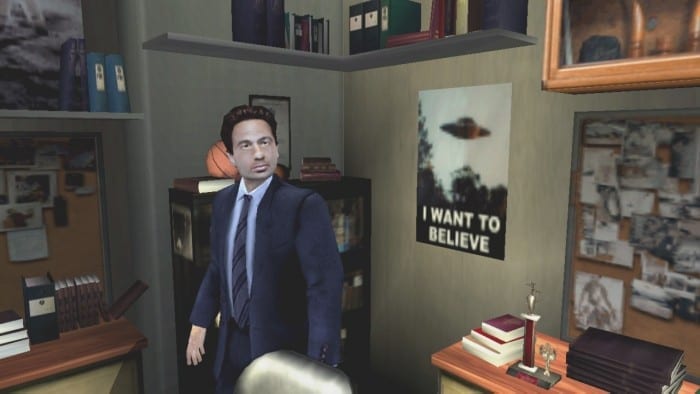 Long after the series came to an end, The X-Files: Resist or Serve continued the story of Fox Mulder and Dana Scully in a video game medium. With the return of the series, X-Philes will want to dig up their old PlayStation 2 and play this lost classic another more time.

For those unfamiliar with the show, The X-Files was a science fiction horror drama that focused on the exploits of FBI Special Agents Fox Mulder and Dana Scully. They would investigate cases that involve extraterrestrial and paranormal phenomena while the story arc focused on the Syndicate’s plot to help the Colonists conquer earth. The show lasted from 1993 to 2002, becoming one of the longest-running science fiction series in television history while having a profound influence on pop culture. The series also spawned two movies, two spin-off shows and a few video games with The X-Files: Resist or Serve being the only good one.

Set during Season 7; the story follows Agent’s Mulder and Scully as they investigate a series of murders along with strange events in Red Fall, Colorado. Its first suspected that the murders are the work of a witch but during the investigation it is uncovered that something more sinister is responsible. Their investigation leads them to a sinister plot that involves the Syndicate and the Colonists.

The game was successful in capturing the essence of The X-Files thanks to the work of writer Tom Schnauz along with the performance of the original cast; David Duchovny and Gillian Anderson reunited to play their iconic roles. Other cast members included Mitch Pileggi as FBI Assistant Director Walter Skinner, William B. Davis as the Smoking Man along with Bruce Harwood, Tom Braidwood, and Dean Haglund as the Lone Gunmen.

The gameplay uses the standard horror survival template to give gamers a sense of familiarity but adding content that accommodates the traits of the playable characters. Mulder’s role will be focused on exploring areas, over coming challenges and fighting monsters. Scully’s role will focus on solving puzzles- investigating crime scenes and bodies in order to develop a scientific explanation.

Having been released during a time when video game adaptations were usually guaranteed to fail, The X-Files: Resist or Serve was among the few that stood out. However, it was a game that had a few problems that kept it from being perfect.

The first issue is that there are moments were the game felt less like The X-Files and more like Resident Evil, not just with the gameplay but also plot context. The second issues is that the story was more of a bridge between two episodes instead of the closure that fans had wanted. The game could have set the foundation of continuing The X-Files through video games but instead failed to take advantage of such an opportunity.

Despite its shortcoming, the game was successful in capturing the essence of The X-Files.

The X-Files: Resist or Serve is a classic that remained faithful to the series lore and that is what fans of the series will admire. Horror gamers will enjoy this classic for what it tried to accomplish in an era when the horror genre was dominated by Resident Evil and Silent Hill.