Gaming Glories is a special edition gaming feature that encourages writers to revisit and explore games that have helped shaped their gaming history.

Every once in a while, a great game comes along. A game that can transcend to classic status. The date was the 10th of September 2004 and Burnout 3: Takedown had just been released. It was released on 10/11/04 for most of us Europeans, although it was released three days earlier in North America and a whole month later for those in Japan.

For those of you unfamiliar with this game, Burnout 3: Takedown was created by UK developers and EA subsidiary Criterion Games and published by Electronic Arts (EA)- it was an arcade racing game which fused an excellent punk and alternative rock soundtrack with driving very, very fast cars. Takedown was the third entry into the series and Criterion had finally struck gold. It received massive acclaim from all over the gaming industry; Eurogamer, The official Playstation and XBOX magazines and Gamespot among many others scored the game between 9/10 while Metacritic gave it 93/100. You didn’t have to be a fan of racing games to enjoy Takedown, I certainly wasn’t a racing fan but the fun to be had was too much to be ignored.

The game started when you heard Minnesota punk rockers The F-Ups first line of their song ‘Lazy Generation’ on the pre-game menu screen which then took you into a trailer of the game, “We are the lazy generation..”

To this day, I can’t bring myself to skip that trailer and I have to sing along to ‘lazy generation’ at the same time. The soundtrack had a host of big name bands mixed with alternative newcomers. Names like My Chemical Romance, Rise Against, Jimmy Eat World, and Fall Out Boy were mixed with one-album-wonders like Autopilot Off and Moments In Grace. The songs in the game were played through the fictional radio station ‘Crash FM’ which was hosted by the charismatic real-life DJ Stryker who you may know from alternative radio station KROQ-FM in the Los Angeles area.

As I said earlier, on the bare bones, Takedown is an arcade racer with features. The new addition to the Burnout format with 3 was ‘takedowns’ which, of course, was how the game got its name. In addition to the fun high-speed racing and crashing Burnout already offered, ‘takedowns’ were more devious and so much fun. Players were encouraged to ‘takedown’ their racing opponents by slamming them into other vehicles, into walls, off of cliff-sides and many other places. A successful ‘takedown’ on another player or AI would fill your boost meter or upgrade it on the next best boost. For example, you started on a 1x boost which could run out pretty quickly and then went up to 4x if you didn’t get taken down or crash yourself. Other ways to increase your boost were to drive very close to other cars which was considered a ‘near miss’. Driving into, dodging oncoming traffic, and drifting also helped. A cool feature was that if you crashed, you could do an ‘aftertouch takedown’ which meant while in crash mode, you could move your broken vehicle in slow motion to try and ‘takedown’ players catching up on you. 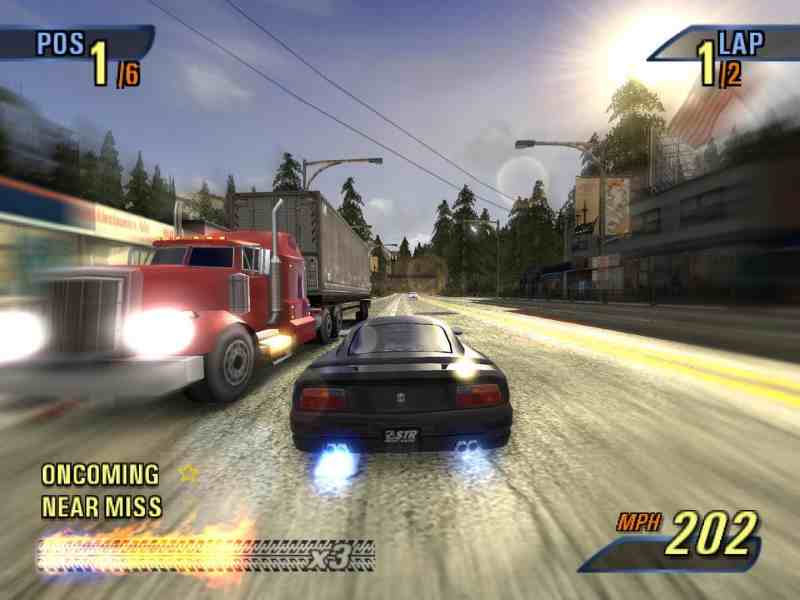 There was a sort-of campaign called the ‘Burnout 3 World Tour’ where you competed in events in different locations in the USA, Europe, and also the Far East. You received gold, silver, and bronze medals in the events which then helped you unlock awards; new events and new vehicles that got more outrageous with the more cash you earned.

Events in the Burnout 3 World Tour were as follows:

Race – A typical race involving a few other racers were first person across the finish line on the last lap wins.

Grand Prix – Win or at least do well enough in a series of four races. If you have the best combined score at the end of the GP, you win and unlock more GPs.

Eliminator – You have to stay ahead in the race to win. The driver who is last in any lap gets eliminated until the race is over.

Face Off – You face off against an opponent who will be slightly better than you in a high stakes race. The AI will attempt to knock into you and make you crash. Boost is more precious in this event as it is harder to get back- but if you win the face off, you win your opponent’s car!

Road Rage – You have to ‘takedown’ other racers trying to hit ‘takedown’ targets to get medals. The event continues until your car is destroyed or the event timer clocks out.

Burning Lap – You see a bronze, silver, and gold time at the start of the race and must beat said time to win.

Special Events – Win enough gold medals on the tour and you get invited to special events in-game. If you win said event, you will receive a gold medal and special event postcard.

Crash – You have to create a massive vehicle pile-up by crashing into vehicles and making it so every vehicle coming in from other roads hit you to earn you major crash dollars so you can purchase new and more fun vehicles.

I could write about this great game all day but I’d rather be playing it. If you still have your trusty PS2 or Xbox, I highly recommend finding this game, having a blast, and just a little crash. If you don’t have the old consoles then just hope that Criterion finally listens to the fans and gives us a current-gen remaster.

“Take one burner, a car filled with boost, streets crammed with traffic, spark the ignition and fly.” (Stryker)