After the massive success of Fallout 3 in 2008, fans were eagerly awaiting another dip into the wasteland when it was announced that Bethesda would be loaning Obsidian Entertainment their IP to produce an un-numbered title in the franchise to satiate fans’ appetites. Swapping the Capital Wasteland for the Mojave Desert, Washington DC for ‘New’ Vegas and The Lone Wanderer for The Courier, we embarked upon a new adventure in the post-apocalyptic US.

Fallout: New Vegas was released in October 2010, 18 months after it was announced. The game was met with a positive reception from critics and fans but technical issues and glitches marred the early experience for many.

I experienced some issues but nothing game-breaking or bad enough to make me hate it. A ridiculously short development time mixed with a janky Bethesda IP almost guaranteed that something like this would happen. Fans of the series like myself tend to give them a free pass because the games themselves end up being fun role-playing experiences full of weird and interesting characters in run-down but vibrant environments.

You find out quickly how dangerous the Mojave can be when, in the opening cut scene, your new character is shot in the head and left for dead after being made to dig his own grave. You come to it in Doc Mitchell’s house who saves your life after a strange securitron robot named Victor – who talks and acts like a cowboy – pulls you from the grave. Character customization occurs here and you pick your opening stats to start off the game. After leaving Doc Mitchell’s, you can now do what you want. Stay in small town Goodsprings a little while and find your feet, get vengeful and go straight to looking for clues about the man who shot you or just go explore the world and do side quests. That’s the beauty of a good RPG.

The Mojave desert was, and still is, an excellent playground of chaos populated with massive forces such as the NCR (New California Republic) and Caesar’s Legion (a group of slavers based on the Roman Empire), smaller groups such as the Powder Gangers, Great Khans, Fiends and Vipers. The desert is also infested with annoying animal nasties such as Deathclaws, Giant Radscorpions, and Cazadores among many other monstrosities. The humans and non-feral ghouls of New Vegas can hamper or help your progress depending on the choices you make in your venture.

It’s a legitimate pleasure exploring the Mojave and New Vegas. The Mojave is full of caves to delve in, ruins to poke through, NCR outposts, Legion camps, burnt towns, homesteads with dark secrets and lonesome buildings where the only things that reside there are radroaches. A major location in the game and the main talking point is Hoover Dam because whoever controls the power controls everything. The New Vegas Strip is bordered by two towns, Freeside and Westside. These towns are full of people too poor to enter the New Vegas Strip along with cheap casinos, prostitutes and mercenaries looking for a quick cap – then there’s The Strip in New Vegas itself.

You can see The Strip long before you get to Freeside or Westside because the Mojave is inherently in darkness at night and you can see this glowing jewel of a city to the north which you are instantly drawn to. With a street of large casinos such as The Tops, Gomorrah and the Ultra-Luxe, you can just gamble away your hard-earned caps.

You should also explore these places because they are full of secrets, some darker than others. Mr House, a major character in the game, has a casino here called the Lucky 38 but no-one is allowed in it except you, the player, but it also means you can’t gamble in it. The NCR have a train that goes to New Vegas and it’s generally where their soldiers spend their leave time drinking, gambling and looking for prostitutes.
Just like Fallout 3, you can meet companions along the way who can lend a hand in firefights and help you lug all that heavy loot you’re carrying around. A fascinating companion I would like to mention is Boone. Boone, a former NCR Sharpshooter, barely talks and is reeling in hate after his wife was sold to slavers. He is very dry and extremely secretive but the more you take on Caesar’s Legion, he’ll tell you something new about his life. It’s devastating for sure. He’s a really good shot with a sniper too so I highly recommend taking him along on an NCR run.
A few notable characters I would like to mention in Fallout: New Vegas:

That’s just four of many intriguing characters in the game that you should meet so get exploring and talking. 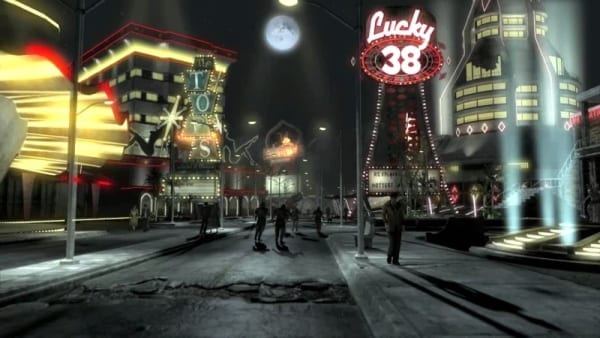 Carrying on from Fallout 3 again, we have the same leveling system where you put points into different skills like small guns, lockpicking, bartering, etc… every time you level up. There are also perks you can take on. There are less perks than Fallout 3 and you get to choose them less frequently (can only pick one every two level ups) but they can still be game changing. The perk system and skill points compliment the moral system very much. It’s pretty simple. Do evil, the game labels you evil. Do good, you’re labeled good. An evil character would find good use in an evil perk such as cannibal which lets you regain health points by consuming flesh while a good character would find use putting skill points into their speech skill so they can talk instead of shooting their way out of every hairy situation.

A mode inspired by modders introduced in Fallout: NV was hardcore mode. It is the absolute best way to play this game for sure but I don’t recommend it to casual players. Your character needs to eat to stave off hunger, drink water to stay hydrated and sleep so you don’t get an early death through sleep deprivation.

Eating food still heals your character but at a much slower rate than playing normal while if your character cripples a limb, they must find a doctor bag or actually find and pay a doctor in the wasteland to fix the limb. It can make for an intense run at times but I find it extremely fun because it raises the stakes considerably.

The ambient music in this game is wonderful once again but the licensed music from the in-game radio stations is just so damn good. The main radio station in the Mojave is Radio New Vegas hosted by Mr. New Vegas voiced by real-life Mr. Vegas Wayne Newton and it boasts stellar tunes from the likes of Dean Martin and Frank Sinatra while the other major station, Mojave Music Radio, plays country classics like ‘Johnny Guitar’ and ‘Lonestar’. Wayne isn’t the only talented voice in the game. Ron Perlman reprises his role as the narrator while solid talent such as Danny Trejo, Krist Kristofferson, Felicia Day and Matthew Perry enter as new characters. (Perry’s performance was a little flat but we can forgive him for it.) 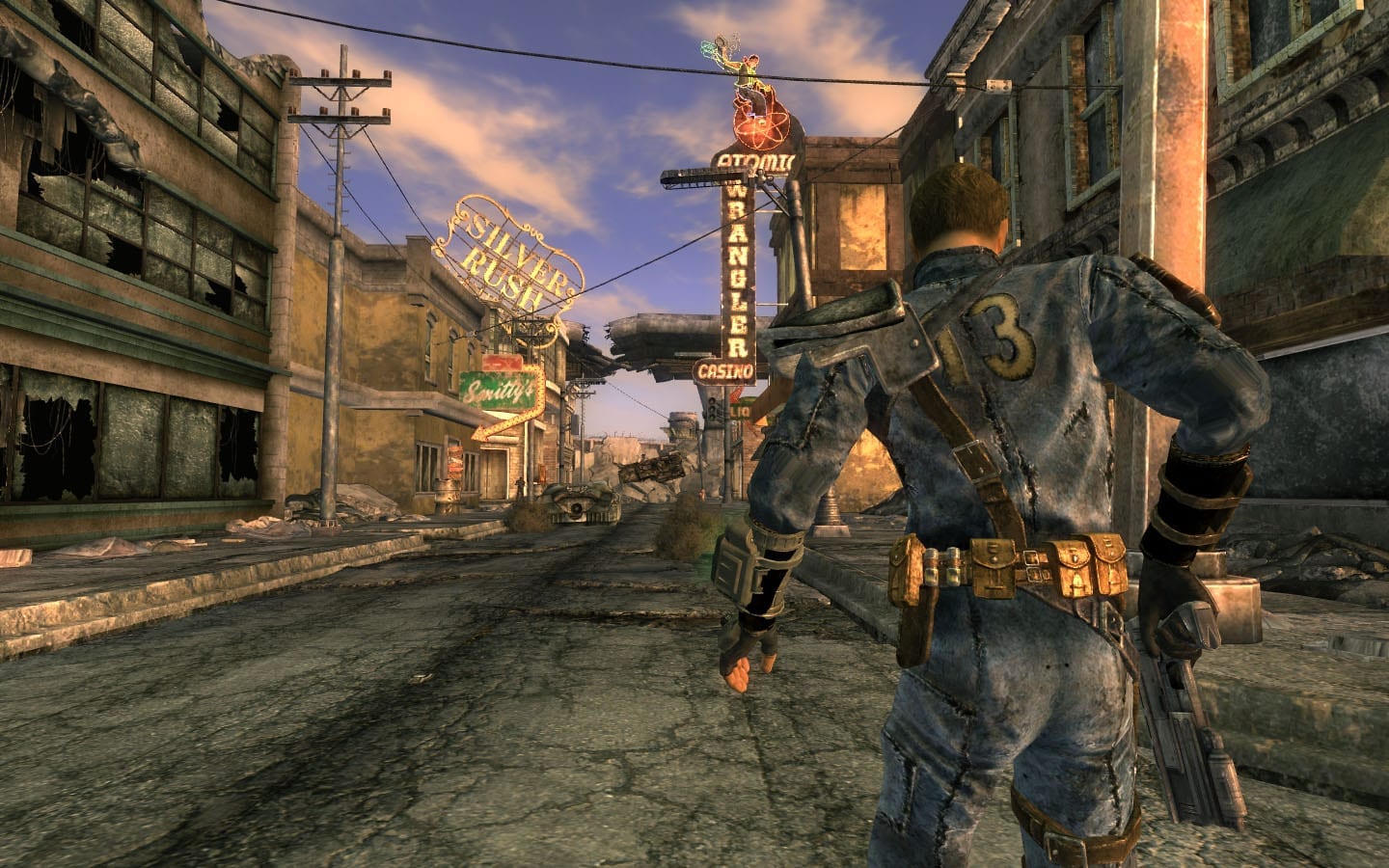 The game will be seven years old this October and it is still as popular as ever. The modding community is keeping it alive massively creating incredible new things in the game like new towns, characters, whole maps, and weapons. Recently I’ve seen that Fallout: New Vegas modders have actually made it possible to play multiplayer and co-operative with friends on PC. That is insane!

Many people including myself want Fallout: NV developer’s Obsidian to be given the chance to create another Fallout title due to their stellar work on NV but it’s looking increasingly unlikely as the years go on. Still, we can only keep on hoping that Bethesda give in to fan demand and let them do it. Until then though, at least we still have New Vegas.