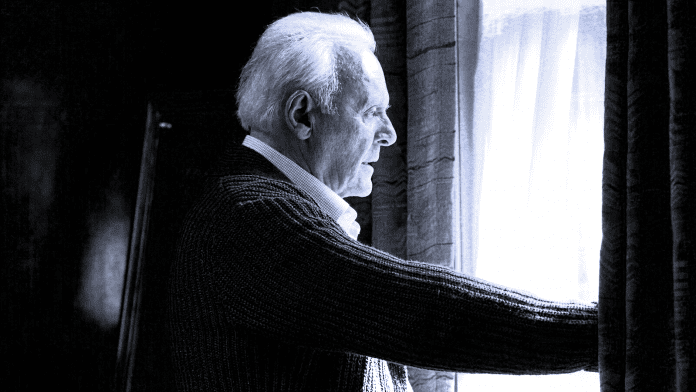 There are two things I love about films more than anything else. One is how subjective they are, and the other is how emotional they can be. These two things are inextricably linked: everyone in the audience brings their own personal experiences into a film, and because of that, everyone has a different reaction to it.

Since cinemas reopened in the UK last month, I’ve cried at a fair few of the films I’ve been to see—but none affected me quite as much as Florian Zeller’s The Father. You’ve probably heard about the film: it stars Anthony Hopkins as a man living with dementia, and Olivia Colman as his daughter who’s struggling to cope. It’s adapted from Zeller’s play of the same name, is set almost exclusively in one apartment, and saw Hopkins take home his second Oscar (though I personally thought the award should have gone to Chadwick Boseman).

I knew what I was getting into when I booked my ticket for this movie: I’d seen the trailer, I’d heard the buzz, and I assumed I was going to cry. Anything about strained family dynamics always gets to me for some reason; add in the dementia, and I’ll likely be a puddle on the floor by the time the credits roll. By the time the credits rolled on The Father, I was indeed a puddle on the floor—but not for the reasons I expected. What got to me most about The Father was its ending: Anthony, now in a nursing home as his daughter has become unable to care for him properly, finally breaks. His strong will shatters into a thousand tiny pieces as his nurse holds him in her arms and he weeps, begging for his mother. It’s a brutal and harrowing scene to watch, made all the more so by Hopkins’ magnificent performance, and it’s easily one of the best films I’ve seen this year.

Read more: ‘Pieces Of A Woman’ Is A Harrowing Portrayal Of Grief: Review

I’m hardly the first person to point that out. Everyone who has seen the film knows the ending is a sad one, and me admitting that I cried isn’t exactly breaking new ground. But the effect The Father had on me was incredibly profound: I sobbed all the way through the credits and on most of my journey home afterwards. Because in those final moments, as Anthony wishes desperately for his mother to come and hold him, I saw myself.

My mother died fifteen years ago, when I was seven years old. She’d suffered with cancer for years, and due to various complications she eventually couldn’t fight anymore. Her death tore a hole in my family that we’ve never quite been able to fill, and it’s taken me years to come to terms with losing her. I still don’t think that I have.

A few months ago, when I found myself in the biggest mental health rut of my life to date, all I wanted was a hug from my mum. The how and the why of that is a story for another time, but I slowly became aware of an emptiness inside me that nothing could seem to fill. Many of those days are blurred in my memory—grief, tears, and loneliness are all I can remember for much of this time. I felt like I was on autopilot, just coasting through my life as best I could.

I know very few people who have lost parents, and even fewer who took a hit years later like I did. To feel that loss is an incredibly isolating experience, and I never expected my own emotions to be reflected back at me quite so accurately. I know how Anthony feels in those closing moments, because I felt the exact same a few months ago. When I was at my lowest, all I wanted was for my mum to come and hug me and tell me everything would be alright—at the end of The Father, I felt that need all over again.

Zeller doesn’t offer a solution in the film, because he can’t: there is no cure for dementia, just as there is no cure for grief. It’s all we can do in both situations to take each day as it comes, and deal with whatever comes our way. For Anthony, this involves a walk in the park. His nurse gently prods him in that direction, and the film ends as the camera moves through the window into the outdoors, the sounds of rustling leaves and birdsong filling our ears as the screen fades to black. It’s something of a hopeful ending, in a way—so I thought I’d try the same.

On my way home from the cinema, I stopped by a park. I sat on the grass alone, watching the sun set behind Cardiff’s gorgeous skyline, listening to the whistle of the breeze in the trees and the hum of the traffic on the outskirts of the capital. When I couldn’t cry any longer, I finally caught my breath—and in that moment, I found something resembling peace. A quiet serenity came over me as I realised that things might be okay after all.

There’s something special about movies that can do this to us. It’s why I love cinema as much as I do. Its power to transport, surprise, amaze, and educate us will never cease to amaze me. The Father taught me there’s more to grief than I previously thought: in its final moments, I felt seen, understood, and held in a way that I have never known before. My mum may not be around to hug me anymore, but The Father showed me that I am far from alone in my grief, and things will get better. Sometimes all it takes is for us to leave our flat.