Jacob Fleming is a student at Swansea University currently studying a module in the Dylan Thomas prize, making him one of the first students in the UK to study a module based solely on a literary prize. Here in the first of two pieces, he provides an exclusive update on the progress of the module.

Over my years studying English Literature, my fellow classmates and I have dedicated a large portion of our time to reading the works of authors who, for the most part, have been long dead. Please do not read this as a complaint! There is plenty to be learned in reading the works of Shakespeare, Milton and the Brontë sisters, to name but a few, but why do we not look at the world that today’s literature represents?

Dr Nicholas Taylor-Collins’s answer to that question is ‘The International Dylan Thomas Prize Module’. The prize, launched in 2016, looks to award £30,000 to any writer (whether writing longer novels, short stories or poetry) aged 39 or under, the age Dylan Thomas died. Not only is it, to quote the press release, “one of the UK’s most prestigious awards”, but is also “the world’s largest literary prize for young writers”.

How the Light gets In, Clare Fisher

In Our Mad and Furious City, Guy Gunaratne

After spending the first 5 sessions learning about what might make a book a ‘prize-winning book’, addressing the context, form character and characterisation, we were also lucky enough to have some speakers come in to discuss their role in the prize, or their jobs in the literary world. Featuring Gary Raymond, senior editor of Wales Art Review and author of The Golden Orphans, and chair of the judging panel Professor Dai Smith, some topics discussed were why a book is nominated, as well as why it might win and what goes into writing a book.

As I write, we are currently in the second half of the course, looking at each text on our chosen shortlist. Having been assigned 3 books at the beginning of the semester, we had to spend time reading and digesting these texts, presenting our thoughts to the rest of the class on what we liked and didn’t like, providing reasons for each opinion. The beauty of this module is that it practically forms a book group for us all to share fun thoughts and ideas, arguing how, for example, Eye Level is either an insightful look in dealing with mental health issues, or just a collection of poems that loses itself in the fragmented style of writing.  Some groups were sure to conjure laughs at the difference of opinion, resulting in a fun session that compiled the skills we have as critical readers as well as our enjoyment of reading for pleasure.

Voting as a class, our student shortlist* is comprised of Soho, Peach, How the Light gets In, Friday Black, Folk, and In Our Mad and Furious City. Having articulated my thoughts about Soho during said presentations, I was thrilled to see Richard Scott’s debut book of poetry make one of our select few choices. Having never read any Queer poetry before, it was quite the experience I think everyone should engage with. Over the coming weeks, we’ll dive into each text, picking out the most dominant topics in each, considering what makes the books so unique and—potentially—prize-winning. Most recently, we looked at Emma Glass’s Peach through the lens of trauma theory. As most of the class, myself included, didn’t seem to enjoy reading the novella, adding a layer of theory and good discussion led to many, including me again, finding a new appreciation for it.

It is with thanks to this module that I have found myself reading books I don’t think I ever would have read otherwise. I would encourage other universities to look at incorporating book prizes, such as the Man Booker and Costa Book awards, into their syllabus. As textual themes and topics change with world events, prize-based modules are sure to be just as dynamic, debating different and new literary works every year.

*The Prize’s real shortlist comes out on 2nd April, and the Prize will be awarded in Swansea on 16th May.

My Journey Through a Literary Labyrinth 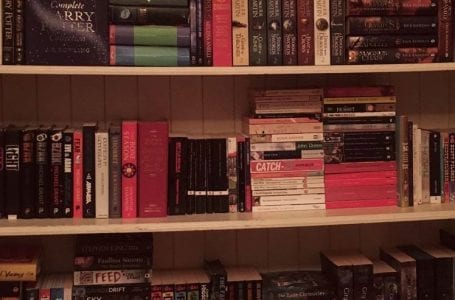