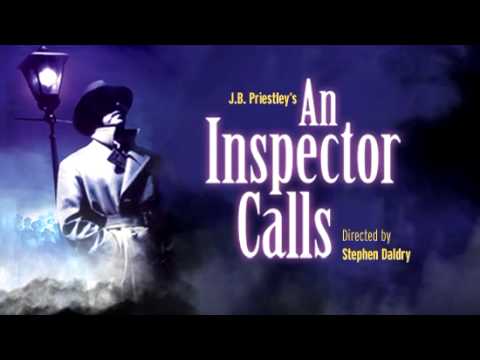 J.B. Priestley’s anti-Capitalist masterpiece: An Inspector Calls. It is the most popular dramatic text currently studied at GCSE in England, and thus a play well-known if not always fully understood. The National Theatre production directed by Stephen Daldry was first performed in 1992 and is currently undergoing a popular revival tour around Britain. I saw it last weekend at the Bradford Alhambra and found the production particularly interesting, with there being many reasons both to love and to deplore it.

The original play saw a cast of only seven characters on the stage, with a particular focus on the tension between them in a single, minimal setting, creating pressure and a real sense of claustrophobia. This production, however, has ghostly reminders of the ‘fire and blood and anguish’ of the Second World War, in the form of several silent actors in 1940s dress at the edge of the stage, accompanied by wailing air raid sirens and searchlights. The setting itself could hardly be described as minimal – an undersized house resting uneasily on stilts and completely enclosing the Birling family, representing the household as a microcosm of pre-war middle-class values. As the action begins to unfold, the façade folds open to reveal the characters inside, who proceed to descend down an iron set of stairs for their interview with the Inspector. Rather convoluted, it seems, though certainly effective when the house collapses in Act Three, letting china and silverware smash onto the stage. Figuratively, the Birlings’ lives have disintegrated with the Inspector’s revelation that they were all partially responsible for the death of Eva Smith.

Lionsgate’s film adaptation of Anna Karenina a few years ago posed similar problems, with the whole movie being enacted in a crumbling imperial theatre. In some ways, the obviousness of such artifice is alienating, and in others it perfectly represents the subtext of the story. An Inspector Calls’ Brechtian theatricality loses some of the close tension shown in other productions, but helps to illustrate key themes – as the play wears on, Sheilia’s immaculately white dress becomes torn and ragged while Mrs Birling’s perfectly coiffed hair tumbles out of its bigoted, capitalist hairpins, physical representations of their self-esteem.

The casting of the play is also done to perfection. Any new tour will have difficulty vying with the excellent choices in the recent BBC film adaptation, starring David Thewlis, Miranda Richardson and Ken Stott, to name a few, but the stage play competes well. Inspector Goole speaks with a rugged Scottish accent, highlighting the difference between him and the pretentious Birlings, while Caroline Wildi, playing Sybil Birling, excels with impeccably brittle Received Pronunciation. Hamish Riddle gives another stand-out performance as the complicated character of Eric, ‘squiffy’ for most of the performance and overcome with repentance for his actions. One of the particular liberties this production takes is having the Inspector walk to the very front of the stage, as the lights come up, and give his most important speech, which denounces insensitive Capitalist attitudes directly to the audience. Whilst undoubtedly effective, it doesn’t have quite the effect on Gerald and the Birlings as one might have hoped for.

Daldry’s direction is, in a word, fantastic. The performances help to lift the production from an exercise in theatrical artifice to a harsh, pensive piece of drama, which will leave you examining your own conscience and attitudes to others as well is Gerald and the Birlings’. In this way, it stays true to what Priestley envisioned when he wrote it: a whodunnit / thriller / morality play all in one, warning that without compassion, society cannot progress into a better world. And that’s a message as resonant today as it was in 1945.