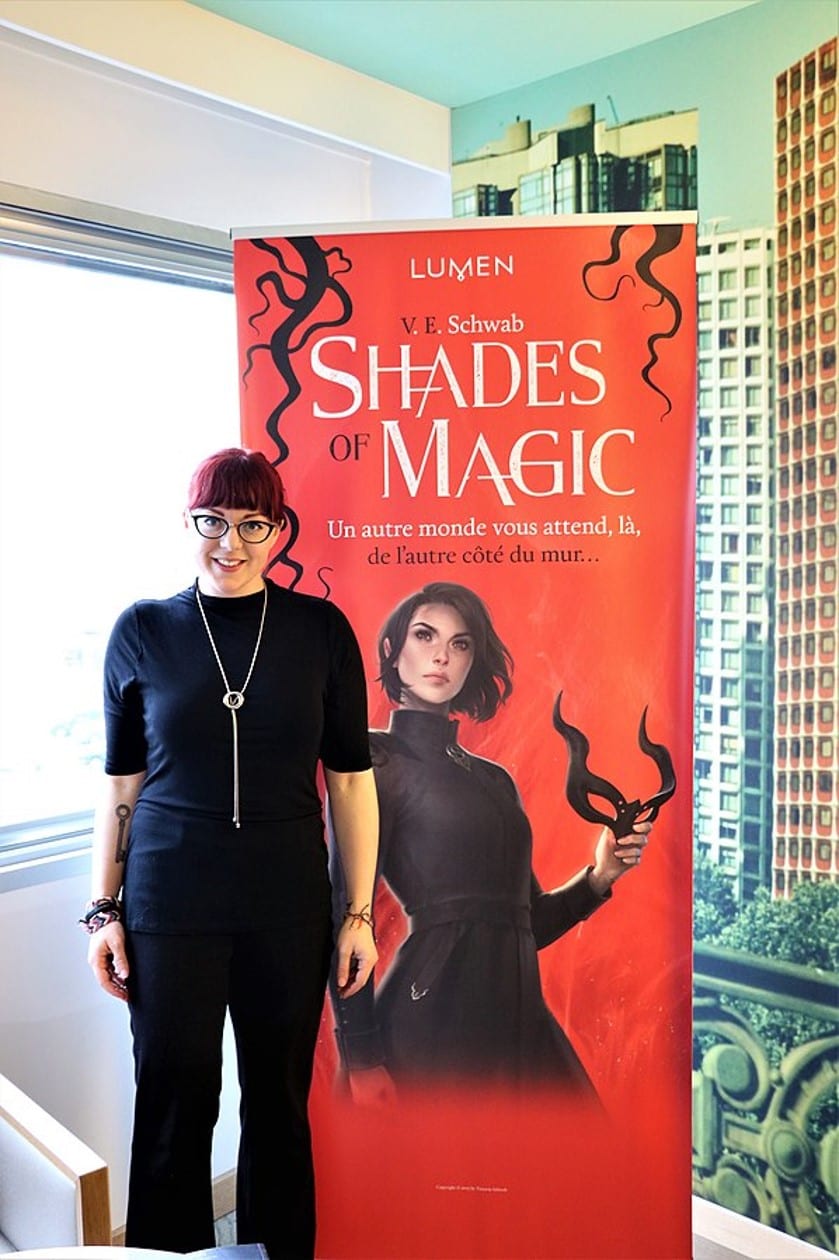 Victoria ‘V.E.’ Schwab is a New York Times, Indie and USA Today bestselling author of twenty novels for children, teens and adults. She has also published a series of comics that serve as a prequel to her bestselling Shades of Magic series. Her latest novel, The Invisible Life of Addie LaRue, has spent sixteen weeks on the New York Times bestseller list since its release in October. A film adaptation is already in the works.

Schwab has not always been as successful as she is today. Her debut novel The Near Witch, first published in 2011, went out of print in less than two years. Her second book The Archived also released to little fanfare.

These early experiences led to Schwab being incredibly open about her struggles in the industry. She felt very alone in her early publishing journey and didn’t want other writers to feel the same way:

” I meet a huge number of aspiring authors and authors new to the industry who come up to me and say thank you for making me feel less alone in how hard this is. And that’s really the only reason why I do it. There’s this pressure to romanticise the creative process. I didn’t want to perpetuate this myth. I didn’t want anyone else to come up feeling as alone as I felt.”

After her early setbacks, Schwab was seriously considering walking away from writing for good. In a post on her Tumblr about her success, she said:

” At 25, I was scarred, terrified that my career was over, because I’d given something everything I had and it wasn’t enough, and I didn’t understand how or why or what I was supposed to do next and part of me wished I’d walked away when that first book didn’t sell. But I didn’t. I couldn’t. And my anger, my frustration, my stubborn resolve was louder than my fear, so I sat down and wrote something else.”

I am incredibly grateful that Schwab did not give up on writing, for I did not find her and the book that made her an inspiration to me till years after her debut.

That book was A Darker Shade of Magic, released in 2015. When I read it, in 2016, my writing focus had been on blogging and journalism for a number of years. Fiction writing had become somewhat of an afterthought. The book, which follows traveller Kell, and thief Lila’s adventures through parallel Londons, reminded me of why I had fallen in love with fiction writing in the first place. I forgot about the outside world because of Schrab’s writing and how enthralled I was by Lila and Kell’s story. That November, I took part in National Novel Writing Month and finally finished my first full-length novel. All because A Darker Shade of Magic reignited a love for fiction writing in me.

As a young writer, I appreciate established authors using their platforms to offer advice about writing and the publishing industry. Schwab’s created the ‘No Write Way’ series in which she spoke to other authors about their writing. That was such a useful tool; to hear all the different ways writers create the books we love. The series lives up to Schwab’s mantra that there is “no right way to write a book”. It was such a bright spot in lockdown when I was struggling with my creativity to hear other authors talk about their own.

As an openly gay woman, Schwab has always been committed to including LGBTQ+ characters in her work. She stood up for this when it became apparent that her Russian publisher had removed a queer subplot from the second book in her Shades of Magic series, A Gathering of Shadows. They did this in breach of their contract to avoid falling foul of Russian gay propaganda laws for minors. Schwab pulled the contract and later found another publisher. They published the book in full with an 18+ rating to comply with Russian law, an option that was available to the original publisher. When announcing the news of the new publisher, Schwab tweeted:

” I was devastated after being forced to cancel the contract. I didn’t want to deprive readers, but couldn’t allow the redaction.”

Inclusion is Schwab’s raison d’etre when it comes to fantasy; in 2018, she said:

” I write fantasy because I want to bolster the believers, and make the sceptics wonder, to instil doubt and hope in equal measure. To help readers envision a time, a place, a world in which fantastical concepts like magic, or immortality, or equality, seem within reach.”

The above quote comes from Schwab’s contribution to the Tolkien Lecture on Fantasy Literature. The subject of that speech was “doors” into reading and writing. The final lines of it summarise why Schwab is such an inspiration for me:

“I will write what I love, and what I long for, in the hopes that for someone, it might not be a way out but a way in.

In short, I will write, in the hopes of writing someone else a door.“

I find that whole idea really powerful. V.E. Schwab writes doors for women through her books by showing women as flawed, complicated, powerful people who have their own agency and adventures.

Off the page, she has also paid her own success forward. By being so open about her publishing journey, sharing her writing process and offering advice to younger writers, she has kept the door open for the women coming up behind her.

It is so much easier for women, in any career, to make their way in if we have a door open to us.

For me, and the others she will have inspired, V.E. Schwab was that door.