Over time I’ve explored many different books from a variety of genres. Having always had a passion for literature, these books have made me laugh, made me cry, brought new issues to my attention and completely altered my perspective on many things. These five are a few of my absolute favourites – books that have really made an impression on me and my life. 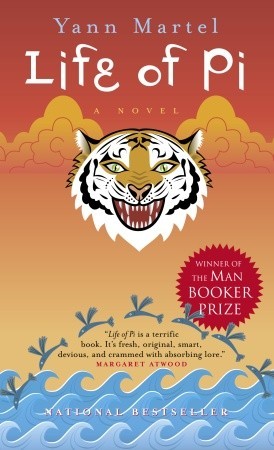 I think that Martel’s masterpiece of a novel is the first I read which dealt with the meaning of life. Pi is trapped on a dinghy in the middle of the Pacific with Richard Parker, a ferocious Bengal tiger. During his time as a castaway he has to learn to survive, sacrificing his morals and despairing as his religious beliefs are challenged by his experiences. Martel manages to depict life’s sharpest and most poignant moments in the tiny microcosm of a lifeboat, and the ambiguous ending also makes this book one of the most life-affirming endings I have come across.

Between Shades of Gray // Ruta Sepetys

Firstly, I would like to clarify that this book has no relation to the works of E.L. James!

It follows the story of Lina, a Lithuanian girl who is displaced alongside her family during the Second World War. The story is incredibly harrowing, harshly describing the horrific conditions suffered by those repressed by Stalin. Sepetys’ characterisation is beautiful, giving even minor characters complexity and depth. Lina’s budding relationship with Andrius, a boy she meets en route to one of the labour camps, is a rare moment of fragile beauty amid the darkness of the novel, one which really spoke to me as a reader.

Tolstoy’s famous classic was the first novel I had attempted by a Russian author, and also the start of my selecting books which would challenge me, rather than simply for personal enjoyment. It contains incredibly thought-provoking passages of prose coupled with piquant symbolism and motifs. Admittedly, the true spark of Anna and Vronsky’s relationship is sandwiched between lengthy chapters elaborating on the intricacies of Imperial society and agriculture, but that doesn’t prove detrimental to the overall weight of the novel. Unlike the Keira Knightley film adaptation, which focuses particularly on the romantic relationships of the characters, wading through these chapters helped to fully illustrate the context of the story, thus highlighting the significance of events. So if I could give my younger self some advice, it would be to not skip through them the first time around!

Lord of the Flies // William Golding

Lord of the Flies is (currently) the best book I’ve ever read. I approached it skeptically as one of the set texts for my English Literature coursework, but was quickly proven wrong after reading it. The ‘darkness of man’s heart’, which the novel describes, is indeed pessimistic, but the way Golding structures his message within vividly poetic prose is just wonderful. Reading Golding’s essay ‘Fable’ and other dissertations on the book also aided my appreciation of it – it is both simplistic and complex, primal and peripheral, is and ea and id. In short, this is the novel I would most recommend to others.

After reading A Thousand Splendid Suns by Khaled Hosseini (often described as the ‘female version of The Kite Runner’) I decided to give this book a go. It focuses on a wealthy Afghan boy’s relationship with the poor son of his father’s servant. Like Hosseini’s other works, it is gritty and heartbreaking; characters are described with painful accuracy, whether betraying each other, vying for attention or searching for atonement and redemption. The scope of the story is huge too – it follows Amir and Hassan through childhood to adulthood and paints a haunting picture of Afghanistan’s turbulence. I don’t mean to sound pretentious, but this novel honestly made me reevaluate my priorities and realise that success is really worthless if you’ve had to sacrifice relationships and loyalty to obtain it. Khaled Hosseini has become one of my favourite authors purely for the simplicity of his messages and the beautiful, introspective way he presents them.