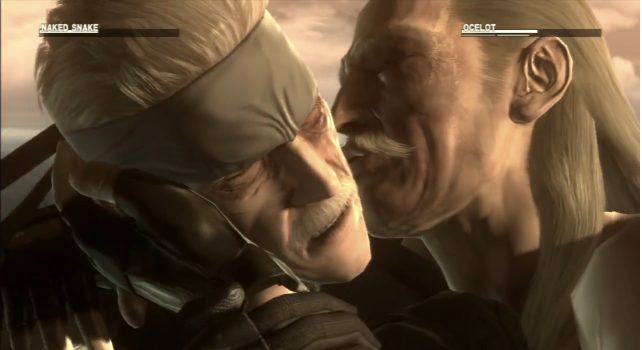 The Metal Gear Solid franchise is probably one of the most paradoxical game series ever created.

For every poignant and meaningful moment, there’s also several scenes of guys peeing themselves and lengthy discussions about pop culture. For every three-dimensional and empathetic character, there’s a guy who can control bees and a literal vampire.

This kind of tonal dissonance is something that Metal Gear prides itself on. There aren’t many franchises that can bring you to tears while you’re still recovering from fighting a cybernetically enhanced president of the United States.

However, there is one aspect of the franchise that makes it stand out, even beyond the cyborg ninjas and cardboard boxes: its approach to LGBT representation.

Though the last canonical game came out back in 2015, the choices made still hold up, especially for an action title. In fact, I’d go as far as to say that Metal Gear has some of the best LGBT representation in gaming history- and I’m here to tell you why.

But first, what’s the story?

Created by equal parts genius and madman Hideo Kojima, the Metal Gear Solid franchise follows the legacy of the legendary soldier Big Boss and his son/genetic clone Solid Snake. Despite the latter being the poster child for the series, more than half of the main series games have you playing as Big Boss.

The series’ full story is notoriously intricate and mindbogglingly complex, but on a base level, the games revolve around either Big Boss or Solid taking on various military organizations in order to uncover information, save lives and stop the world from falling into nuclear warfare.

While this all sounds like generic action on the surface, Metal Gear is laced with a level of spectacle and character that puts it above similar titles, such as the nuclear weapons in question taking the form of giant, bipedal robots and one of the recurring villains being a man called Revolver Ocelot who meows to bring his troops in.

After almost 35 years, Metal Gear is now a staple of gaming, on par with big-name franchises like The Legend of Zelda and Fire Emblem. However, unlike these other industry giants, MGS has always been one step ahead when it comes to integrating diversity.

While the ending in the original Metal Gear Solid (1998) in which Solid Snake and his nerd buddy Otacon drive off into the sunset together may have raised a few eyebrows, the series had their first official LGBT character as early as Metal Gear Solid 2 (2001). This took the form of Vamp, a bisexual Romanian man who- as his name suggests- also happens to be a vampire. Though he’s only a minor character, a few codec calls with Solid Snake reveal that he was the lover of Scott Dolph, the father of secondary antagonist Fortune.

Snake Eater took this even further with the introduction of Colonel Volgin and Major Raikov- two of the game’s antagonists who just so happen to be in a relationship. And a committed one at that. One late-game mission sees Big Boss- under the codename Naked Snake – having to find, incapacitate and steal the Major’s clothes to make a disguise. A disguise that – if used during the fight against Volgin – will bring the seven-foot electric Russian to his knees, reaching out for his partner.

It’s not all just men either.

Metal Gear Solid: Peace Walker (2010) featured Dr Strangelove, a female British scientist with an infatuation with The Boss- the woman who taught Big Boss everything he knew and eventually had to kill. During briefings with her, Big Boss- and by extension, the player- learns that her alias comes from a nickname she was given at the facility she worked at. The picture of The Boss she kept on her desk paired with her disinterest in men suggested to her colleagues that she had a “strange love” in reference to her lesbianism; a somewhat derogatory statement she reclaimed for herself.

And while not necessarily confirmed, there are other characters that pop up in discussion. The aforementioned Revolver Ocelot being a prime example. While his infatuation with Big Boss in MGS3 could very easily be written off as naïve idolization, his presence and actions in later games are far more debatable. For instance, in Metal Gear Solid V: The Phantom Pain (2015), Ocelot notes that their base’s sniper, Quiet, is “in love with the legend” stating that he “was the same way once.”

Why does this matter?

Metal Gear at its heart is an action game.

While it popularized- and arguably pioneered- the stealth game genre, it still has all the tropes of typical shooter. A gnarly war hero taking down baddies to save the world- or at least the United States. Despite its trademark ridiculousness, the overall plot and gameplay is gritty and ‘manly’.

But this is why the series’ diverse cast stands out.

You wouldn’t find these types of characters in Call of Duty or more story-based action titles like Uncharted– and even if you did, the likelihood of them being officially confirmed, a fully fleshed out character or even remotely relevant to the plot would be slim.

Metal Gear covers all these bases.

Each LGBT character the series has introduced has not only been well-written, but also essential to the plot of their respective games.

For example, Dr Strangelove not only provides valuable, realistic insight into her life and experiences as an out-and-proud lesbian in 1970’s Britain, but is also the creator of the AI pods that feature in Peace Walker and MGSV.

Equally, despite not being shown on screen together, the depth of Volgin and Raikov’s relationship could be argued to be one of the main catalysts for MGS3’s endgame. After using his, uh, ‘intimate’ knowledge of the Major to figure out Big Boss’s disguise, Volgin’s anger with the soldier for harming- or possibly killing- Raikov leads to the very torture sequence where he gains that trademark eyepatch and actually gives the Colonel a reason to want Big Boss dead. Just like Strangelove, Volgin also returns in The Phantom Pain, but as a being of pure, fiery rage, seeking revenge on Big Boss for foiling his plans and killing his lover.

It would also be prudent to note that EVA- Big Boss’s companion and, later, lover- was also involved with Volgin, making him technically bisexual. However, while he’s shown to be dismissive and abusive with her, Raikov is referred to as “the Colonel’s precious pet”, suggesting that the Major is well looked after.

Additionally, if Revolver Ocelot’s infatuation with Big Boss is romantic, then that would mean that one of the most beloved, iconic and characters in Metal Gear– and indeed gaming- history is LGBT.

Let’s wrap it up

Representation is a rather hot button topic these days, especially in the gaming community. Game designers and developers, large or small, are starting to realise how much diversity matters, but it doesn’t mean they’ll incorporate it well. And even if they do, the reactions from fans or other external influences are insanely unpredictable.

Naughty Dog’s The Last of Us Part II (2020) received remarkable backlash after central character Ellie was revealed to be a lesbian, launching hundreds of angry fans to start rambling about ‘the gay agenda’. In addition, Mass Effect 2 (2010) was allegedly supposed to have more LGBT romance options, but developer BioWare was forced to cut them after widespread media backlash.

Both of these examples were released long after most of the Metal Gear series, yet MGS has received little to no complaints. But why? Well, it could be two things.

The first is that Metal Gear as a whole is known for its atypicality in every regard. It’s known for subverting expectations with its approach to bosses and typical action tropes. Therefore, it makes sense that it would go against norms in the industry surrounding the characters as well- and, in this case, that means including LGBT characters in a time when there were none.

The second is that- just like the rest of the series’ characters- Strangelove and the others are well-written. Their identity is as important, but they are not their identity. Their sexuality and relationships are just as important as their professions and motives, putting them on a level playing field as their straight counterparts without erasing their stories. This limits the chances of angry opportunists screaming about ‘forcing diversity’.

But no matter the reason, Metal Gear refusing to keep its cast in the closet- or should we say, under the box- is something worth celebrating.