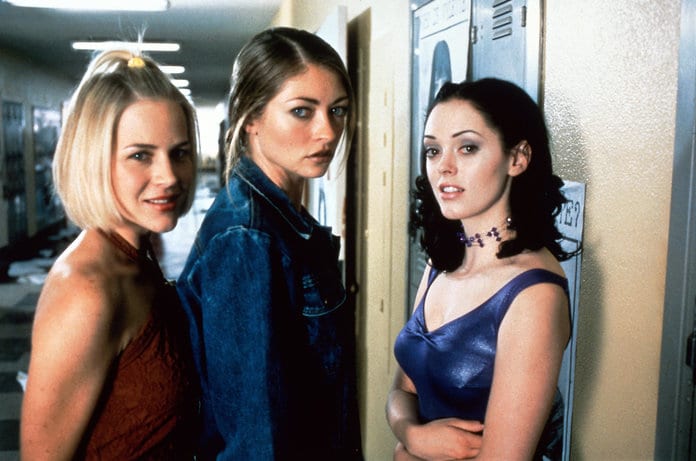 Jawbreaker is an American punk rock band from the 80s that still exist today. Jawbreaker is a round hard candy that is colourful, overly sweet and can cause damage to your teeth. A jawbreaker is also the cause of death of Liz Purr (Charlotte Ayanna), one of the most popular girls at Reagan High School, in the 1999 movie named—you guessed it—Jawbreaker.

Liz has no lines, is described as being a queen bee that “ruled with kindness,” and dies in the first 5 minutes of the film by choking by the aforementioned candy. She’s the victim of a birthday prank pulled by her three best friends: kind Julie Freeman (Rebecca Gayheart), loyal follower Marcie “Foxy” Fox (Julie Benz) and ice queen Courtney Shayne (Rose McGowan), who fake-kidnap her from her bedroom before school. When they open the trunk of Courtney’s car, mere minutes later, they find that she is dead with the jawbreaker—Courtney’s idea—lodged in her throat.

Courtney, always cool-headed and in control, decides they should cover it up by pretending Liz is unwell at home. But when Fern Mayo (Judy Greer)—an invisible girl in high school’s hierarchy that likes gardening and has the worst name of all of cinematic history—catches them in the scene of the crime, the other three girls need to keep Fern quiet. The price of her silence? A makeover and a spot in the most popular group of girls in school. Which she accepts, of course.

If this movie had nothing more to offer than to just be the one to give Rose McGowan a role as a cruel high school queen bee, it would already be a masterpiece. It’s more than that. Jawbreaker offers us all the delicious high school film clichés. A voiceover to start. A makeover scene. School cliques. Iconic one-liners. Overly mature witty dialogue. And, of course, a scene where a character remembers they were friends with the school outcast when they were kids, and pitch-perfect slow-motion walks down the hallway to a great soundtrack.

Not all of it is predictable though, as the film packs in a lot of plot in its surprising just 87 minutes of runtime. It keeps the story entertaining the whole time and the stakes high. There is betrayal, a homicide investigation, sex, a lollipop. Julie feels conflicted about keeping it all a secret. Courtney loses control as Fern changes her name to Vylette and gains power. Pam Grier shows up as a leather-clad detective to try and solve the murder. Prom is just round the corner.

The movie is not perfect, nor is it a feel-good teenage comedy. Some jokes don’t land as the sour and bitter humour is not for everyone. The sexual politics are outdated, and some things should be taken with a very big grain of salt. Like a lot of black comedies, Jawbreaker abuses themes such as sexual assault allegations, used by the villainous Courtney as a way to accuse a stranger of the murder. A word of warning: Marylin Manson has a short, non-speaking cameo as, fittingly, a creepy man in a bar.

The film has a very clear predecessor in the 1988 cult classic Heathers, and after it bombed for audiences and critics alike, it became a cult classic of its own. But other movies come closer to it in its cynicism and darkness: Valley of the Dolls and Faster, Pussycat! Kill! Kill! were cited by the director as inspirations. Others compare Jawbreaker, in its campiness, exaggerated costumes and acting, to films like Death Becomes Her and Rocky Horror Picture Show. These films are all cult classics, especially in the LGBT+ community.

It is all wrapped up in a bow of beautiful costume design that puts the characters in a series of monochromatic bold outfits and bright lip gloss: the very best of late 90s early 2000s fashion. The fashion is something talked about to this day, a testament to Vikki Barrett’s vision. All the way to its perfect ending that feels even more iconic at every watch.

Jawbreaker is available to rent on Amazon and Google Play.