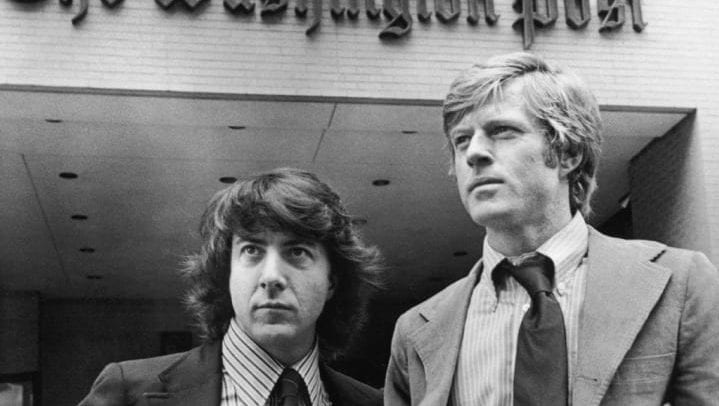 After what has been perhaps one of the most tumultuous election campaigns in modern U.S. history—and one that continues to cause division across the country—the people have elected Joe Biden to be the next President of the United States.

However, incumbent President Trump is not going down without a fight, and I imagine his leaving of the White House will not be a simple or quiet event. But this wouldn’t be the first time a sitting President has left the White House in chaos and drama. To this day, Richard Nixon is still the only President to have resigned the office, after details of the Watergate Scandal and its subsequent cover-up by the administration were revealed. Even years after his death he continues to be a polarizing figure, with many of his successes and failures overshadowed by the one event that brought him down.

In Nixon, writers and directors alike have found a great deal of inspiration. Cinematic adaptations have seen the man and his administration subjected to both Shakespearean analyses and thrilling detective films. Here, I am going to take a look at three pivotal films that dissect the man, his time in power and the aftermath.

If ever there was a definitive film that illustrated the deep-rooted corruption that surrounded Watergate, All The President’s Men would be it. Following the investigation conducted by Washington Post journalists Bob Woodward (Dustin Hoffman) and Carl Bernstein (Robert Redford), Alan J. Pakula takes their book and paints an eerie picture that covers not only the investigation, but the attempts the smother it and the ever-present threat for the journalists’ lives. Delving deep into the widespread wiretapping of the DNC’s campaign offices in the Watergate building, the film features all the tropes of a film noir: veiled threats, mysterious tip-offs and dark, grainy meetings with mysterious figures. The story writes itself.

While Nixon the man is not directly shown here, he and his administration serve as an omniscient threat for Woodward and Bernstein as they embark on their journey to bring the President to justice. Perhaps his lack of presence here is the most intriguing interpretation of Nixon in cinema—a man who was elusive in his methods in an office that, until the reveal of the extent of Watergate, was long thought untouchable. Not showing him, but expressing visually the power and fear he exerted, is the most faithful depiction of all.

While All The President’s Men opted to address the overarching threat of Nixon’s presidency during Watergate, Oliver Stone presents an intimate portrait of the man himself, from his younger years to the memorable moment he was flown from the White House lawn in the Marine One helicopter.

The second of Stone’s ‘American President’ trilogy, Nixon paints a more sympathetic, if flawed, version of the President before and during his presidency. When developing a biopic, there is a fine line that separates the facts from the drama. While, of course, we are never really going to know the politician behind closed doors, Stone forms an almost Shakespearean caricature as Nixon wrestles with inner demons, regrets and, of course, his own crimes. Critically divisive at the time it was released, Nixon has drawn a more favourable following in the years of reassessment that have followed, and is, to date, one of the more definitive looks at an exceptionally secretive figure.

There is, of course, a time after the presidency—when a former president once again resumes the role of an ordinary citizen after holding an extraordinary office. However, after resigning in disgrace and later being pardoned by his successor, Vice-President Gerald Ford, Nixon would look to new avenues in order to refresh and revitalise his image. However, unlike Trump who is able to directly communicate with the people through the use of social media, Nixon’s contact with the people would have to take a televised approach. Enter David Frost.

Ron Howard’s Frost/Nixon is based on the stage play of the same name by Peter Morgan and served as an incredibly faithful screen adaptation, right down to the use of leading actors Michael Sheen (as David Frost) and Frank Langella (as Nixon). Locked in a battle of wits, Nixon and Frost’s interaction would go on to shape contemporary television interviews of politicians, holding them to account for their actions.

Despite the look behind the curtain in gaining access to Nixon and the inner machinations of the painstaking research that went into it, Ron Howard’s film is at its best when Frost and Nixon are left to their own devices during the interviews themselves. The parry and riposte between the two, especially during the climactic final interview, is electric, and the balance of power shifts expertly throughout the film. Nixon, for the most part, appears to run the show, testing Frost’s mettle and resolve in getting to the truth behind Nixon’s rationale of the Watergate cover-up and with it, his apparent contempt for law when placed in the highest office in the land.

With the Presidency there will always come scrutiny, and with scrutiny comes material for writing. While it has been a great many years since Nixon’s time in office and indeed his death, he still serves as a unique—albeit conflicting—source of inspiration for filmmakers, examining the often unseen machinations of the man and the machine. Unlike Nixon, however, Trump has a penchant for courting controversy in order for his administration to cling on to even the smallest scraps of power.

It will only be a matter of time before filmmakers begin taking a serious look at Trump and how he will be presented on screen. I foresee that the coming months leading up to Biden’s inauguration will be pivotal in their presentation of him. Nixon left the White House in disgrace, but is often looked back on with in film with great complexity and on occasion, sympathy. The question is, will they do the same with Donald Trump?