This Is It, Leonard Cohan

Born in Montreal in 1934, Cohen’s artistic career spanned seven decades, having produced ten collections of poetry, two novels and fourteen albums. I am ashamed to admit that upon first discovering this collection, I had never read any of his work, nor had I been aware that he was a published poet. He released his first collection of poetry, Let Us Compare Mythologies, in 1956, and has since established himself as a canonical American writer. In fact, even if he had never ventured a career in music, Cohen would still have an important and prodigious literary voice.

Having spent five years on Mt. Baldy, a Buddhist monastery in India, Book of Longing is a distillation of what he learnt during his time there. The collection is littered with spiritual imagery, meditating upon the mystical and magnetic forces of romance and religion. Cohen entwines religious and sensual imagery to create a book which maps his melancholic, longing heart, undoubtedly intensified by his abstinent years spent as a Buddhist monk.

I have chosen ‘This Is It’ for this week’s Poem of the Week, a poem which emanates the desire to sever yourself from your partner entirely, once the relationship has inevitably crumbled. Cohen adopts a voice of certitude, assuring his lover that the end of their relationship is “it”, it is permanent and resolute. It’s a place we all find ourselves residing in after a torturous breakup, one of self-denial, believing that you have the capacity to erase them from your mind completely. Of course, this is rarely the case. The use of the anaphora “This is it” asserts the desire for finality, yet the irony lies in his repetition of the phrase, as though the more he recites it, the more he is deluding himself into believing it to be true. This implausible assurance he offers to the reader, though assertive, gives the poem a sense of naivety. It is impossible to entirely wipe your memory of someone.

Cohen meditates upon the, often unhealthy, intimacy we seek in relationships. The line “I want your skin/ to fall off my skin” creates an image of dependency, implying that romantic relationships are often so immersive, our beings entwine with theirs. This notion juxtaposes with his assurance that “This is it”, for it is futile to assume that it can ever be “it” with someone you were once so close to. Memories may fade and tatter, but they cannot be expunged by the sheer force of will.

Like much of Cohen’s work, this poem is sensual, reinforced by the accompanying sketch, which depicts the groin of a woman, perhaps his lost lover. A number of critics claim that his sketches dilute the impact of the text, existing merely to fill up blank spaces on the page. I hold no such view, however, for his dolorous self-portraits and seductive sketches add another layer of poeticism to his words. His drawing, coupled with the poem, suggests the prevailing memory of his partner will be an intimate one. The memory most difficult to shed, the one he thinks of often, is the raw, unveiled intimacy they shared, vulnerability which is difficult to recapture. An intensely personal poet, his writing seeks to exhibit the inner turmoil of a pained artist, afflicted by a wounded heart and whittling optimism. In fact, by the end of the poem, the reader is left hesitant in believing it really is “it” for the speaker and the lover in question.

Tags: book of longing leonard cohen poem of the week this is it 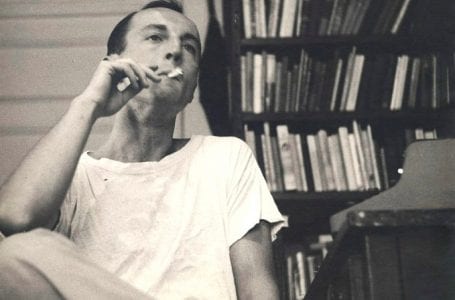 Poem of the Week

Poem of the Week: The View from...