When I think of the breakthrough of the miniskirt in the 1960s, the first image that springs to my mind is that of the final scene in the musical, Hairspray. Tracy Turnblad emerges wearing a monochrome mini dress and almost stuns the other female characters into tripping over the voluminous layers of petticoats under their 1950s “poodle” skirts. Tracy’s style in this scene emanates modernity and presents the new age of women born with the miniskirt. Thought by many to have been invented by Mary Quant, this rise of the hemline empowered 1960s women and gave them the chance to step out of their mothers’ shadows by becoming independent trendsetters who now had the “ability to run for the bus”, as Quant put it.

When first released in the early 1960s, Quant said her design for the miniskirt was made above all for practicality – something that was not provided in trends of the 1950s. Having seen women live in skirts that finished well below the knee (a continuation of the style worn during WW2 when women began working in place of men who went to fight), the designer saw the need for something that satisfied the lifestyle of working women who were earning money as well as fulfilling their traditional roles as housewives and mothers. Mary Quant said therefore that it was not in fact she who invented the miniskirt but the women of London; they had inspired her to create something to compliment their evolving lives.

Perhaps one of the most memorable patrons of the miniskirt was the British supermodel, Twiggy, whose fame rocketed after popularising the outrageously thigh-baring skirts (typically eight inches above the knee) with her chic pixie-cut hairstyle and boyish figure embodying the birth of the swinging sixties. It is due to her fame concerning the miniskirt that Twiggy is thought of as the world’s first supermodel; not only was she globally stunning but she was as coveted as the clothes she wore, in that numerous stylists wanted her long legs prancing down their own catwalks.

Despite its popularity, the miniskirt still had an arduous battle against those who considered it to be an inappropriate act of sexual rebellion through women showing skin that was previously kept hidden. In a few words, the fashionable sliver of material provoked a surprisingly large commotion for something so small. It even seemed that designer Christian Dior was sceptical about the new fashion along with others who saw the skirt as a symbol of revolution against social order. When Dior’s 1966 show revealed the return of more conservative hemlines, lovers of the miniskirt were outraged and began protesting the return of women hiding themselves under their petticoats. Thus, the British Society for the Preservation of the Miniskirt was born – an organisation launched purely to fight for the ability to wear the little skirt as an everyday item of clothing without bearing its negative connotations. 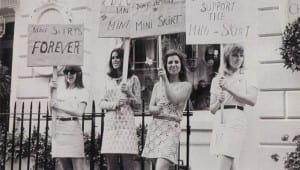 After the 1960s, hemlines rose and lowered with the economic stability of the world; the shorter people are of money, the shorter skirts will become. Today, skirts of all kinds are worn without a second thought but the miniskirt remains a timeless staple item in numerous wardrobes worldwide. Few people appreciate its history, so I recommend that next time you decide to sport the miniskirt, you take a moment to think about Quant and Twiggy (and of course, Tracy Turnblad) and how they shaped the way we now look at women’s fashion with an all-accepting eye.