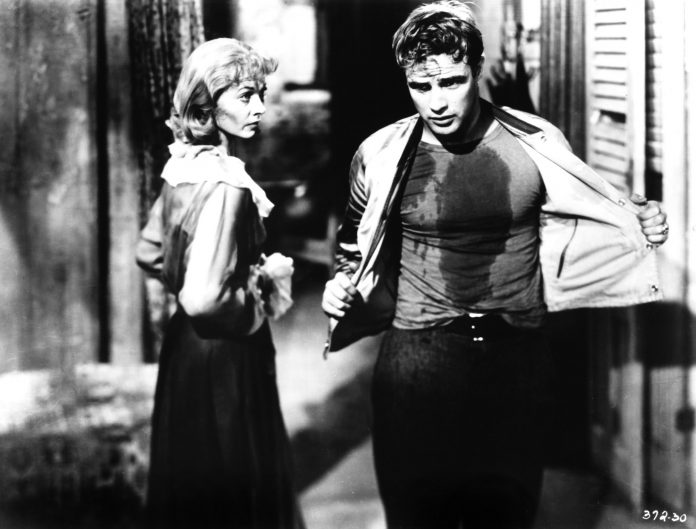 This year marks the 70th Anniversary of A Streetcar Named Desire, based on the play of the same name by American playwright Tennessee Williams. When it premiered on Broadway in 1947, it was immensely successful, winning the Pulitzer Prize for drama and running for two years. The director of the original Broadway production, Elia Kazan, loved it so much, he decided to bring the play to Hollywood. With it he brought Marlon Brando, Kim Hunter, and Karl Malden; his Stanley, Stella, and Mitch (and several other minor characters). For the play’s protagonist, though, some more star-power was needed. Broadway’s Blanche Dubois, Jessica Tandy, stayed on Broadway and a new Blanche was flown in from across the pond: Vivien Leigh, who played Blanche on London’s West End. Leigh was a Hollywood heavyweight. She shot to stardom after starring as Scarlett O’Hara in a tiny film called Gone with the Wind.

The four main actors were all nominated for acting Oscars at the 24th Academy Awards, a feat that had only been achieved five times prior. Three of the four won, Brando alone missing out on a gold statuette that night. It was nominated for a total of twelve Oscars, winning four (three for acting and Best Art Direction in Black and White). The impact of A Streetcar Named Desire grew as the years went on. In 1999, it was selected for preservation in the United States National Film Registry by the Library of Congress for being “culturally, historically, or aesthetically significant.”

Having directed the stage production, Kazan knew the play well and wanted to stick as faithfully as possible to Williams’ words. Minor changes were made; some scenes were moved to different locations, while the bowling alley and the nightclub were added. Williams, co-writer of the screenplay alongside Oscar Saul, approved the changes. Kazan felt keeping the film mostly in the Kowalski apartment would emphasise the feeling that the walls are closing in on Blanche and that she couldn’t escape, and it proved a genius decision. Even when she isn’t in a scene, when the men are playing poker, she is hidden from the camera by only a thin piece of cloth separating the Kowalskis’ rooms. It feels as though Blanche is being slowly suffocated by the apartment in which she is meant to feel safe, never able to escape Stanley Kowalski, a “survivor of the stone-age!”

Streetcar’s journey to Hollywood wasn’t all easy, though. There were some changes that were made for less favourable reasons. Between 1934 and 1968, the Motion Picture Production Code (MPPC) was enforced. Everything from scripts, edits, cuts, had to be approved by a committee. Certain things that were in the play simply would not be tolerated by the MPPC. The original version of Streetcar was heavily censored for the screen. The MPPC would not tolerate any allusions to homosexuality, and so Blanche’s ex-husband, Allan Grey (who, in the play, committed suicide after being outed as gay and having an affair with a man) was changed. In the film it was Blanche’s general scorning of Allan that drove him to suicide, which doesn’t make as much sense.

Removing Allan’s homosexuality removes a very important, albeit brief, theme in Streetcar. Williams, himself a gay man, often used his plays to deal with aspects of his real life, once saying that “I have followed the developing tension and anger and violence of the world and time I live in through my own steadily increasing tension as a writer and person.” In the play, Allan is long dead, so he never appears. But we do hear about him, about how Blanche told him “you disgust me!” at a ball, so he shot himself. Allan’s death haunts Blanche throughout the play, the polka music that was playing at the ball often creeping into the background of scenes where she feels under pressure. It even blares during the climactic scene.

Williams was gay in an era where it was seen as a mental illness. He had to disguise his queer subtext in a heterosexual character. Blanche (who, not-so-coincidentally, was seen as having a mental illness). Many critics argue that Blanche is literally a stand-in for a gay man as much of her behaviour is stereotypically attributed to gay men, avoidance of harsh lighting, hysteria, and dramatics, lasciviousness (all very stereotypical, but literary criticism often is). Blanche, like any gay man of that era, is judged and scolded for her sexual desires. In one scene, she is driven away from her home after being accused of flirting with a younger man. She has a connection with and a sympathy for Allan because, in a way, she relates to him, and of course as Williams is actually the person behind Blanche’s words. All this ever-present meaning  vanishes when Allan’s homosexuality is stricken from the record.

The MPPC removed many scenes from Streetcar. The ending scene with Stanley raping Blanche was re-edited to be more ambiguous, Blanche’s flirtatious conversation with the paper boy was toned down, and references to Blanche’s sexual promiscuity were cut. However, Kazan did film some of these scenes, and when the MPPC was replaced in 1968, they were restored, and most modern versions have some of these scenes included.

Even with the intervention of the MPPC however, A Streetcar Named Desire was nothing like what audiences were used to. It is a highly sexual film, albeit entirely through implication. The way Stella looks at Stanley as sensual and dangerous, and the way she always takes him back, intrigues Blanche just as much as it frustrates her. The costume designers made Brando’s clothes tighter than normal to emphasise his physique, while the temperature on set was raised to make him sweaty. In 1951, having a sexual character in a mainstream film was pretty much impossible, but Streetcar did it without even mentioning the word “sex” once.

Tennessee Williams was holding a mirror up to society, even the ugly parts, and that is just as present in the film as it is in the play. A Streetcar Named Desire is more than just the film that gave us “Stellaaaaa!” It introduced the world to a new star in Brando and with him, a new style of acting, a new style of film. Streetcar is a dark tragedy and a leap forward for American cinema that showed audiences the type of unguarded storytelling that didn’t become mainstream until the 1970s. A Streetcar Named Desire is one of the most influential and important films from the Golden Age of Hollywood.