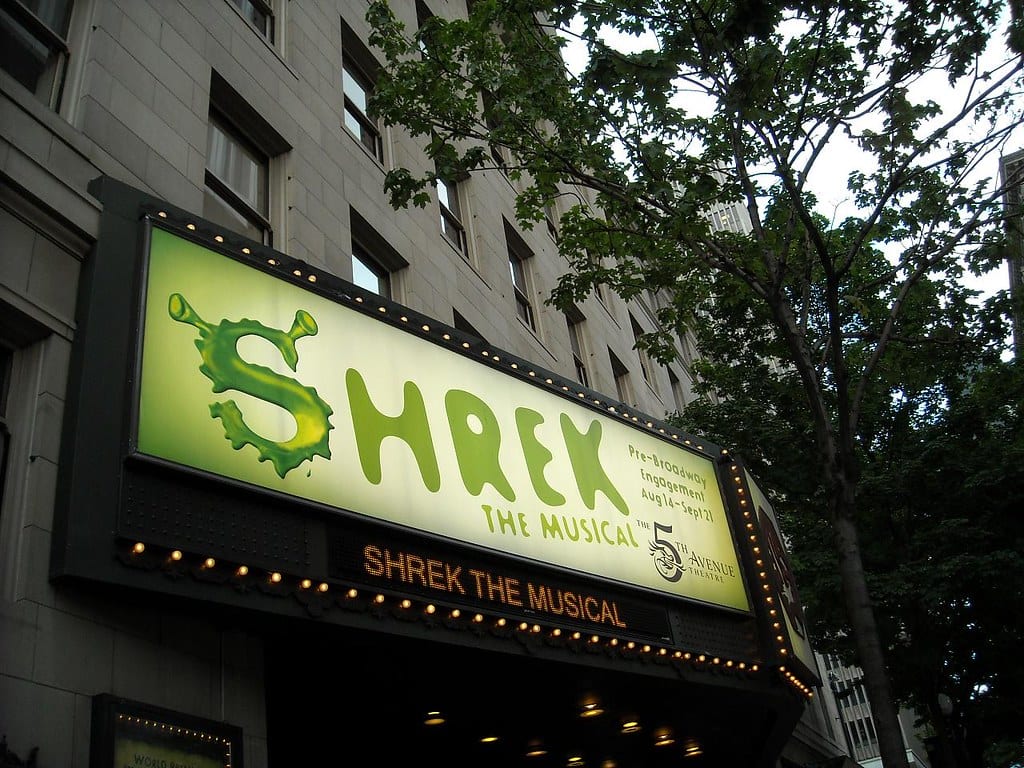 Celebrating its 20th anniversary this year, Dreamworks’ animated classic Shrek is a cultural phenomenon. It has spawned three sequels, television specials, a spin off film, and of course, a Broadway musical.

Shrek The Musical (with music by Jeanine Tesori and book and lyrics by David Lindsay-Abaire) ran on Broadway from December 2008 until January 2010. This filmed version of the production made its debut on Netflix UK last month. The musical mainly adapts the first Shrek film, but adds elements from the original book.

The production remains faithful to the film’s plot. It follows ogre Shrek, a recluse who finds his solitude broken when his swamp is taken over by displaced fairy tale characters. In order to regain it, he makes a deal with Lord Farquaad of Duloc. He will rescue Princess Fiona (whom Farquaad wishes to marry) from her dragon-guarded tower, if Farquaad returns his home. Naturally, things do not go exactly according to plan!

Costume designer Tim Hatley won a Tony Award for his work on the show, and I can absolutely see why. The costumes are eye catching and colourful, and each character is instantly recognizable. The attention to detail is amazing and I especially loved that Pinocchio’s nose grew when he lied. Shrek and Fiona’s prosthetics are also brilliantly done, and they were believable without appearing to be too much of an encumbrance for the actors wearing them.

All the lead characters are excellent, and the ensemble of fairy tale characters rounds out the cast beautifully. Sutton Foster is perfect as Fiona, with stunning vocals, excellent comedic timing and wonderfully awkward charm. Brian d’Arcy James’ Shrek has a hit or miss Scottish accent, but he captures both Shrek’s gruffness and his vulnerability extremely well. He certainly has an incredibly powerful voice too. Christopher Sieber as Lord Farquaad is hilarious and it’s impressive that he delivers his entire performance kneeling.

My favourite of the cast is Daniel Breaker, who plays Donkey. His facial expressions steal every scene, he’s wonderfully sassy and his soaring vocals are not shown off nearly as much as they should be! D’Arcy James and Breaker also capture the exasperated parent/overexuberant child dynamic that Shrek and Donkey have perfectly.

The songs are a bit of a mixed bag. The rousing ensemble number ‘Freak Flag’ is definitely the most memorable for me, and I found myself humming it after the show was over. Other standouts included the closing song of Act I ‘Who I’d Be’, a wistful ballad that explores Shrek and Fiona’s deepest desires. Fiona’s initial introduction song ‘I Know It’s Today’ is a stunning number which spans her childhood, teenage years and finally adulthood. The culmination of the song with Fiona’s three actresses harmonising together is one of the highlights of the show. As a fan of the film, it’s also lovely to see ‘I’m A Believer’ included in the score.

On the other hand, ‘I’ve Got You Beat’, a song which largely relies on fart humour, misses the mark for me. The rest of the songs were very much quantity over quality. Although there was plenty of musical numbers in the show, very few were stuck in my head after watching, which is unusual for me after seeing a musical.

Overall, Shrek is a real treat to watch. The actors clearly have fun with their roles, and the joy and humour is infectious. Does it have the best score? No. But it does have a lot of heart, wonderful performances and put a smile on my face.

Shrek The Musical is available on Netflix now.

Image Credit: “Shrek the Musical” by jdnx is licensed under CC BY 2.0