Let’s face it, these days most people turn their sheds into, well, something other than a shed. Whether it’s a cool outdoor bar or even a sauna, it’s fair to say most millennials don’t use their outhouse to store Flymo parts and weedkiller anymore. Not many, though, use it as a place to craft rich, melodic and magnificent songs. But then again, there are not many bands like The Shed Project.

Most of their previous songs have been written and recorded in singer Roy Fletcher’s back garden, providing a homely loveliness amongst the huge choruses. For single number six, however, they ditched the shed and went somewhere a bit fancier… a bloke’s bedroom. In truth, The Shed Project could record in Asda’s chilled aisle and it would still come out sounding fantastic. They are already being hailed as one of Britain’s best new bands and ‘Feel My Love’ is only going to cement their place in that pantheon.

Many bands have tried to ape The Stone Roses, but not many have done it with the sincerity and grace that The Shed Project do. Not only that, but Fletcher seems to have a hotline directly to Ian Brown’s mind—or, rather, his mind before he became a rattling loon on Twitter.

When drummer Reni left The Stone Roses in 1994, it spelled the beginning of the end for the band. Fletcher, perceptive and potent, assesses the emotions of that breakup and writes from Brown’s perspective, channelling all his (supposed) misery, confusion and feelings of betrayal into his own soaring vocal.

Musically, ‘Feel My Love’ is simply irresistible. It has the retro jangle of, of course, John Squire, but this is far from a sad parody. By the time the jaunty piano and stomping drums come into play, you are on a kaleidosopic journey of wonderful harmonies, Fletcher’s fantastic falsetto and one hell of a chorus.

It’s fair to say that if Brown had taken this little ditty to the Stone Roses studio back in the nineties, Reni would have put his bucket straight back on and got back on his stool.

The Shed Project have also filmed a music video for ‘Feel My Love’, which contains a number of references to the Roses.

In truth, though, this could have been a disaster. A band that sound like The Stone Roses writing a song from the perspective of The Stone Roses? Pass us the remote. Thankfully, in the experienced and determined hands of The Shed Project, it’s an original, heartbreaking but ultimately uplifting listening experience. Maybe the Sheds will even have their own Spike Island experience some day.

In an interview with The Indiependent, The Shed Project lamented the fact they only formed in Jan 2020. “If we’d started 25 years ago, we could be millionaires by now,” they sighed. They needn’t fret just yet—the way this band are going, they’ll be turning that shed into an awards cubby by the end of the year.

Tags: music song of the week The Shed Project the stone roses 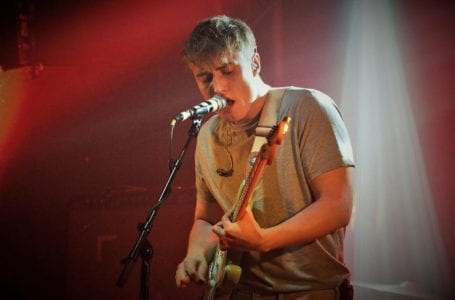