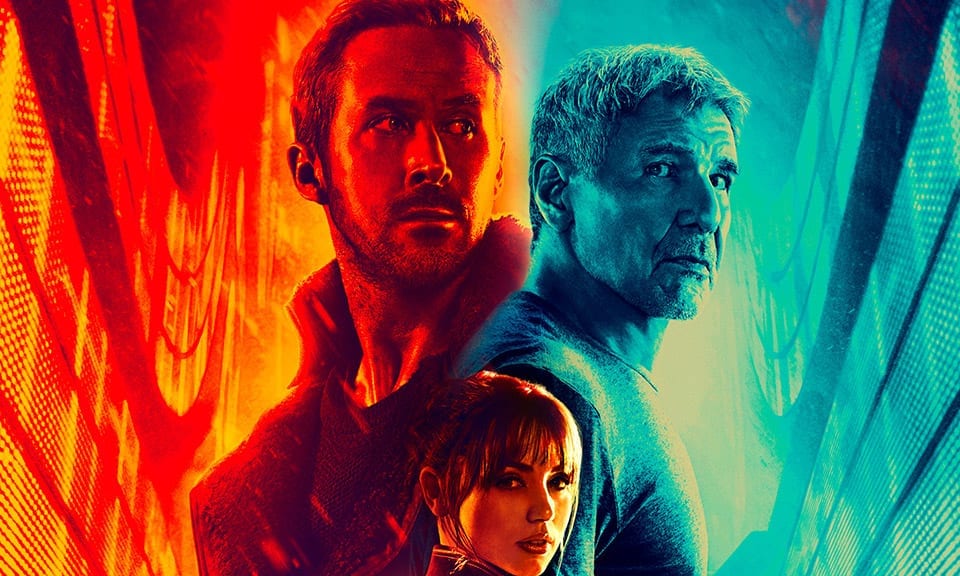 Before this spoiler filled review of  Blade Runner: 2049 begins, we’re giving you one more chance to click away from this review. Everything about this film requires you to go in totally blind in terms of it’s plot, character descriptions and spoilers. If you want the non-spoiler review then click on the link below to go to that.

Oh my god, talk about surprises.

With this film coming off a legacy that is still to this day shrouded with mystery, it is still the enigma that holds this film together. From the very first scene we are introduced to the fact that Ryan Gosling’s character K; is a replicant Blade Runner. They really didn’t waste their time with that one especially since it was much debated by fans coming from trailers and sneak peeks.

We are introduced to this world of the obeying model of replicants, which by and large K initially appears to be, where they are legal and supposedly a “more stable” design of the previous replicants which are still illegal and Officer K’s main purpose is still the purpose of any Blade Runner; to track down and kill replicants. However, with him being an upgraded version, it allows him the ability to question and uncover;  a fact that ultimately sets him onto the main plot of the film.

K discovers that a there is a replicant out there who wasn’t designed but was born from another replicant. Whilst he is sent to try and find this miracle, his memories he believed to initially be implanted in his mind cause him to wonder and believe that he might just be miracle who was born; a story that plays out marvellously. It plays with the ideology that if something is born then it has a soul and to have a replicant think to himself that he is bred for something special, so it really does toy with the concept of “what is it to be human?”. Is being human something you are born being or is it something you can actually become? An age-old question that this film handles with utter elegance.

It’s easy to forget at points that K is even a replicant and the film has its ways of reminding the viewer of this that are subtle and nuanced.

Is Rick Deckard a replicant?

The main question that has been on everyone’s lips since the release of the first film is simply whether Rick Deckard is a replicant or not. Something so shrouded by mystery should never be made so explicit, so to kind of hint and tease at it rather than just lay it right there was a welcome and vital addition to the film. It was teased but never laid it out in black and white and in the end, brilliantly left it open-ended and still rife for speculation. Whilst in the film it is highly speculated that Deckard was made to find Rachel and reproduce, it never goes so far as to explicitly make a judgment call. But yes, another spoiler alert, the born hybrid replicant’s parents are Deckard and Rachel and supposedly it was Tyrell’s last wish to create a replicant who can reproduce; which is both a mind boggling yet truly intriguing idea.

However, it is later revealed that the replicant prodigy isn’t K but is in fact a girl who illegally implants fake memories but which are actually revealed to be her real memories. These are the memories implanted in K which led him to believe that he was the Messiah, which really gives his story such a crushing edge. As humans, we are programmed to believe that we are built for something greater and it’s a concept that Blade Runner explores so well. It was really cruel on K’s part because it’s that realisation that the protagonist isn’t special at all but it’s that cruel reality that gives the film a unique edge in. Ultimately this leads him to side with the replicant rebellion fuelled by the fact that if a replicant can reproduce then they can take over as the most dominant species; which humanity was always scared of happening.

A stroke of cinematic genius

Easily the film’s most beautiful yet divisive scene is the three-way sex scene between replicant K, his A.I. hologram girlfriend Joi (Ana de Armas) and the replicant prostitute Mariette (Mackenzie Davis). This scene is arguably the best and most genius sex scene ever seen on film. There is no way K and Joi can have any sexual contact with each other because she’s a hologram so she organises a prostitute that she can sync up with in order to have this sexual experience. It truly is a stroke of cinematic genius. The romantic principle is that two people become one in this moment of intimacy but because the relationship is separated by artificial reality and artificial representation, it is a physical presence who has to be the missing piece of the puzzle. It plays out in such a visceral and heartbreaking way that it should definitely hold as a scene to be studied and worshipped, and the tragic, heartbreaking end to Joi is more powerful than most human love stories seen on-screen.

Following on from that, what this film is controversial over is the mass objectification of woman. Whilst undoubtedly the only nudity that is shown is all from females is kind of disappointing, it doesn’t render the film sexist. What people seem to misunderstand about films like this is that this is a alternative universe where it’s inhabitants hold a very different moral belief and compass as we do so when looking at the objectification of female nudity, you shouldn’t say “This is 2017, I thought we were passed this!”, but you should say “No, this a completely different universe from ours which means that everyone will hold a different conception of what is deemed right or wrong.” It’s clear that some people don’t take that into consideration when watching a film like this.

After much deliberation and studying of the film it is clear that Luv (Slyvia Hoeks), Niander Wallace’s right-hand-replicant so to speak is the real villain of this film. She can protrude so much hate and detest but also desperation through her eyes and her expression that it is so immersive. She deserves all the recognition she can get because quite frankly, with her being the most inexperienced actor there and her putting on one of the best performances, that is something to be applauded and respected. Jared Leto as Wallace did a fantastic job, yet had little screen time whereas Sylvia Hoeks constructed a masterful performance.

In terms of who is the villain? That question does seem to spiral all over the place. On the surface, it may seem obvious but when you dig deeper, you start to think whether it’s Robin Wright’s character, whether it’s the rebellion, whether it’s the orphanage, it does move around a lot given that the pacing is quite slow. That isn’t a negative point but it can be to a lot of viewers and it may be the breaking point for some.

Should you see it again?

Yes, you certainly should! Everything from the production design to the sound department, the direction to the writing is perfect. Especially if you’re someone who loves the original, it really is perfect. What it has managed to do is to pay homage to rather than alter the original which felt like the perfect direction to go.

Whilst it is a beautifully moving masterpiece in it’s own right, this film stands as perhaps the greatest sequel of all time; and in an age where bad sequels and reboots are rife, Blade Runner: 2049  truly is in a league of its own.