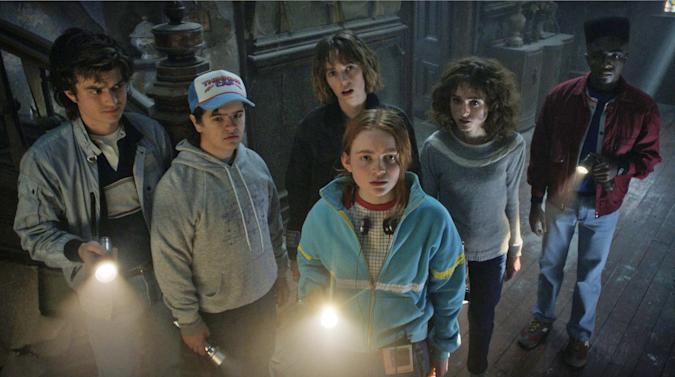 Waiting for this has made us all go upside down. Finally, the wait is over. Stranger Things season four will be released on Netflix in 2022.

Millie Bobby Brown, Winona Ryder, David Harbour, and the rest of the gang are back for more adventures. The show will also be expanding from just being set in Hawkins.

In addition to the original cast reuniting, there will be some new faces joining the show. The latest additions to the show will include Jamie Campbell Bower (Peter Ballard), Eduardo Franco (Argyle), and Joseph Quinn (Eddie Munson) joining the cast as series regulars for season four.

The creators of Stranger Things, the Duffer Brothers, will continue to produce the show for the new season. The Duffer Brothers have given us a teaser trailer through all the Stranger Things social media sites to whet our appetite until next year. The main takeaways from the trailer are that Hopper survived season three, but is being held captive in Russia—a new location? Eleven also looks in trouble, surrounded by a group of men, seemingly against her will.

When asked by Deadline about what fans can expect from season four, David Harbour said the following:

Director Shawn Levy recently explained how Covid-19 was the main reason for the delay in filming for season four, along with subsequent Covid protocols. Lewy teased fans that the delay will be worth the wait: “we chose Season 4 to be by far — and I mean, by far, far, far — the most ambitious of the seasons.”

As we are waiting on the release of season four, there is no news as yet, as to what the future holds for Stranger Things. Will we get a season five? Can Dustin, Lucas, Will, and Mike save Hopper? What will be the fate of Eleven and will she finally escape “Papa”? Finally, can Mike and Eleven continue their teenage love affair?

There are so many unanswered questions, but whatever happens in season four, it seems like we’re in for a treat.