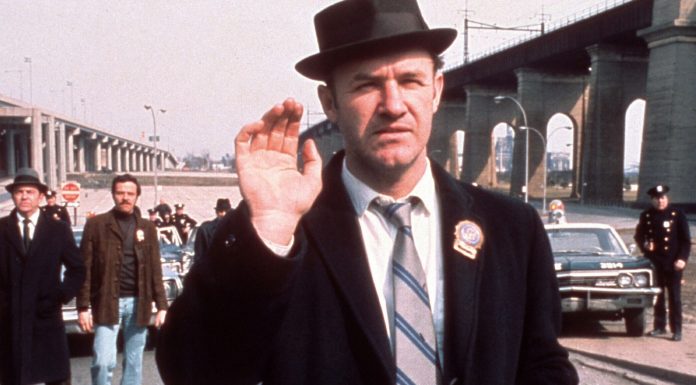 William Friedkin’s The French Connection starts with a moment of silence and darkness. Just as you begin to grow apprehensive, the room is lit bright and echoes with dark, foreboding percussion. Don Ellis’ blaring score wails and cries over the ominous, minimalist opening titles, perfectly setting up the next 90 minutes of injustice, sudden violence and ego-driven desperation.

The French Connection is an unflinching, uncompromising, disconcertingly honest look into the world of The New York Police Department. The time of year is quickly made clear; as cops “Popeye” Doyle (Gene Hackman) and Buddy Russo (Roy Scheider) stake out a drug pusher, Doyle is dressed as Father Christmas. Doyle and Russo are trying to break a gigantic case. A multi-million-dollar shipment of heroin is due to arrive in their city any day, and both are desperate to catch it. Confounding our expectations for movie cops, we never hear Doyle or Russo express any disgust at drugs or dealers. Both policemen seem to have no moral connection to the law that they’re enforcing. Russo wants the drugs seized because his job demands it. Popeye seems to be driven by something more than his career; his ego.

Hackman plays Popeye as a minor celebrity, a bullish thug with the threadbare legitimacy of a badge. Doyle announces his own name when he walks into bars, bolstering his own pride and intimidating the clientele. Most of the people Doyle hits, harasses, intimidates and threatens are black. You learn early on that Doyle is an unapologetic racist, as you watch him use the n-word with a vicious sneer.

In A Decade Under the Influence, an essential documentary about New Hollywood, Roy Scheider tells a story about a time when he watched The French Connection in a New York cinema. When Doyle used the n-word, the majority black audience applauded. Scheider realised that they were applauding because the racism of the city police was finally being depicted honestly on the big screen.

Russo plays an important role in the film’s exploration of racism. After Doyle uses racist language to argue that Russo should have been more cautious around a black suspect, Russo wearily responds that the suspect could have been white. By offering only token resistance to Doyle’s aggressive vitriol, Russo stands as a symbol of the department’s institutional racism and a society-wide apathy towards discrimination. Russo is the good cop to Doyle’s bad cop. He’s more calm, level-headed, sincere and controlled, but he still tacitly accepts the racism of his colleague in order to make his own working life easier.

Forged in the New Hollywood crucible of Vietnam-era cynicism and critical politics, honesty is the defining trait of The French Connection. Racism, excessive brutality and disregard for human life aren’t necessary components of the movie’s storyline, but they are included because they were the everyday reality of New York policing. Has much changed since? This isn’t a movie about racism, but it’s a movie where everything happens within an institutionally racist environment.

The film’s crowning moment comes with the riveting, teeth-gnashing tension of its acclaimed car chase. Doyle tears up the metallic city streets in a commandeered car as he pursues a killer seeking refuge in an overhead elevated train. We rapidly cut between the French killer terrorising the train passengers, Doyle’s manic face and the rush of oncoming traffic. Hackman’s face contorts monstrously as he pours his entire life force into a stream of silent screams.

The peak of this sequence is a famous set-up. Doyle’s speeding car narrowly misses a woman pushing a pram across the road. This overt reference to the pram in danger on the Odessa steps in Sergei Eisenstein’s Battleship Potemkin cements the cinematic power and weight of Doyle’s car chase. The entire movie is terrific, but the car chase is an iconic, unforgettable sequence that earns its place in the hall of all-time great movie moments.

As well as Eisenstein, Friedkin takes influence from Hollywood legend John Huston and Italian art director Michelangelo Antonioni. Doyle’s reckless violence in his pursuit of the drug ring draws from Huston’s The Treasure of the Sierra Madre, a film much admired by Friedkin, where Humphrey Bogart’s character Fred Dobbs falls victim to his own self-destructive greed. The quiet, languorous scenes following kingpin Alain Charnier in his home city of Marseilles owe their texture and style to Antonioni, whose movies L’Avventura and L’Eclisse focus on slow immersion and remain notable for their sparse and selective use of music.

These twin influences punch together to make The French Connection an archetypal 1970s American classic. The New Hollywood movies of this time melded the darker side of old Hollywood with the style and risk of the 1960s European avant-garde. By marrying Huston and Antonioni, Friedkin achieved exactly that.

The cynicism and style of Friedkin’s key influences synthesise perfectly in The French Connection’s hauntingly desolate ending. Doyle and Russo corner Charnier in a dead-end, an isolated industrial plant on New York’s Wards Island. The rest of the criminal gang surrender, leaving Charnier the cocky kingpin alone in the derelict building. Popeye enters in silence, stalking the drug lord though the empty rooms until he sees movement up ahead. Popeye shoots, only to realise that the man ahead wasn’t Charnier. It was Mulderig, his FBI colleague. Mulderig lies dead on the floor. Charnier has disappeared. Don Ellis’s score moans and growls like a wounded animal. A final montage tells us that the leaders of the criminal conspiracy escaped charges entirely or were given token sentences, while Russo and Doyle are reassigned.

Charnier’s disappearance makes very little logical sense, but perfect thematic sense. Like Anna’s disappearance in Antonioni’s L’Avventura, the mechanics of the vanishing are unimportant. What is important is what the disappearance symbolises; the mysterious injustice of the society that our characters live in.

Doyle can’t get his man because he’s the main character in a New Hollywood movie. Like Jake Gittes in Chinatown and Harry Caul in The Conversation (another Hackman role), justice eludes our lead. The Vietnam war burns up South East Asia and Nixon sits comfortably in the White House while corruption and racism run like rust through the veins of the establishment. The French Connection captures an honest truth with startling electricity and depth, namely that there can be no justice in this America.