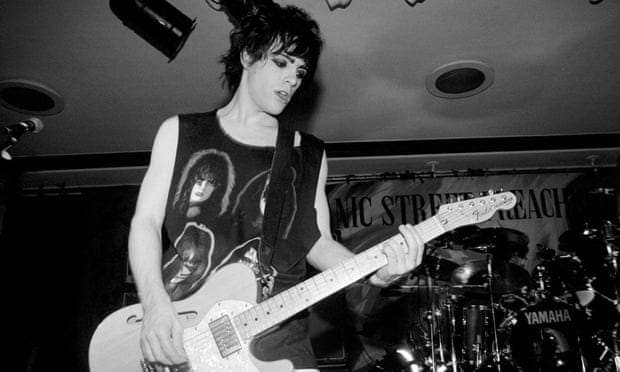 TRIGGER WARNING: This article contains references to self harm and anorexia, which some readers may find distressing.

On 1st February 1995, the Manic Street Preachers were preparing to start an American tour, promoting The Holy Bible. Early that morning, guitarist and lead songwriter Richey Edwards disappeared from the Embassy Hotel in London, never to be seen again. His car was found beside the Severn bridge – a notorious suicide hotspot.

Edwards was presumed dead by absentia in November 2008, but many rumours suggest he faked his own death, provoking discussion even 26 years later.

A few months before his disappearance, the band released their critically acclaimed album The Holy Bible. The release offered a response to a nihilistic, torrent and violent society in the age of Cool Britannia, New Labour and Blur vs Oasis. The albums content dealt with the personal and disturbing nature of Edwards’ struggles, as he wrote the majority of the release.

At the time of recording, Edwards was suffering from complex issues including self-harm, anorexia, and alcohol abuse, leaving the other three members extremely concerned.  Lead vocalist, James Dean Bradfield, recalls being given the lyrics to ‘Yes‘ and thinking “You crazy fucker! How am I supposed to write music to this?”. Bradfield adds: “a song like “Yes” is a combination of other people’s lives and Richey comparing them to his own”.

On The Holy Bible’s release, Edwards was a patient at the Priory Hospital in Roehampton. This incident was one in a long chain of concerning stunts. During a gig in Thailand, Edwards began cutting himself across his chest. Bassist, Nicky Wire, recalls the Thailand incident: “There had been a lot of darkness, but we did have the raw materials of something extraordinary coming from it. I think [Thailand] was worrying as it just happened”.

Bradfield admitted that he “had been given a set of ceremonial knives as a present by fans they actually said please use them on yourself.”; Consequentially, during a lone acoustic performance, an ecstatic crowd witnessed Edwards cut himself up against a speaker. Infamously, when questioned by NME journalist Steve Lamaq on the authenticity of the band, Edwards also carved ‘4 REAL’ into his arm with a razor blade.

I am an architect!

Despite the weight of Edwards’ problems, there was no doubt in his creative abilities and the cult following he created.

Lifelong Manics’ fan, Ben*, argues that Richey Edwards contributed hugely to the band’s identity and its reflection of the wider public – particularly on The Holy Bible. “Richey was consuming a lot of culture at the time” he says, adding: “I think he was reading like 4 books a week”. This is reflected by the inclusion of dialogue samples at the beginning of each track, from the excerpt of 1984 on ‘Faster’ spoken by John Hurt, to an extract of the report on the Nuremberg Trials on ‘The Intense Humming of Evil’. The most haunting of the dialogue samples is on 4st 7lb, (named so because it is the official weight that death can occur) taken from a 1994 anorexia documentary narrated by Jeremy Llewelyn-Jones, Caraline’s story about Caraline Neville-Lister.

He thinks the inclusion of these audio samples was to “reflect the nature behind each song – the album ultimately offers us an insight into Richey’s mind at that particular time”.  In Simon Price’s biography of the Manics, Everything, James Dean Bradfield describes the “academic discipline” of each song being “like an essay”. This insight into Richey Edwards’ head shows a focus for expressing pain, rather than crying for help. The band were fully aware of his troubles and treatment at the time of The Holy Bible’s release.

The sound of one man in a close-knit group of friends slowly disintegrating and using his own anguish to create some of the most brilliant art to be released on a large scale in music in years […] it’s not a suicide note; it’s a warning.

26 years have passed since the disappearance and in that time a disturbing number of ‘theories’ questioning what happened to Richey Edwards have arisen. The notion that Richey is out there is fanciful at best and ugly at its worst. As a Manics fan told me:

“It is insensitive towards the band, Richey’s family and those who knew him […] Richey seemed a beautiful, intelligent and gifted soul. His legacy will always live on and never be forgotten”.

In 2009, the band released Journal for Plague Lovers, an album of material written by Edwards before his disappearance.

Of course for the public, Richey Edwards will remain an immortalised Rock & Roll Legend, but for his family and friends he meant so much more. In the foreword to her book Withdrawn Traces: Searching for the Truth about Richey Manic, Rachel Edwards said: “I want my brother to be remembered as more than a member of a band.”.

*Names have been changed.