The COVID-19 pandemic has given rise to a new phenomenon – the remote musical. Earlier in lockdown, the theatre community speculated about which shows could be easily performed with no physical contact – Jason Robert Brown’s The Last Five Years was at the top of the list, and so Lambert Jackson productions teamed up with The Other Palace to make it a reality.

Unlike The Old Vic’s upcoming, socially-distanced performances of Lungs, The Other Palace opted for a production entirely filmed from the actors’ homes. The musical is unconventional in its structure; it follows the breakdown of a marriage over (you guessed it) five years, but while Jamie (Danny Becker) starts at the beginning and tells the story chronologically, Cathy (Lauren Samuels) begins the musical at the end of their relationship and works her way back. The two coincide in the middle for their wedding. The opposite timelines allow us to see the narrative unfold from different perspectives, proving that there are two sides to every story.

Samuels (who also directs the piece) has the difficult task of starting the musical with its most notorious song, ‘Still Hurting’, whilst simultaneously introducing the audience to this new digitised format. Her performance is respectable, but the awkward medium – which feels a bit like it’s all been filmed on Zoom – takes a while to get used to. She redeems herself later in her hilarious rendition of ‘Summer in Ohio’ and a profound, pathos-inducing ‘Climbing Uphill/Audition Sequence’. Becker seems to have a slightly more theatrical approach to his role, with some of his songs coming across a little too stagy. That said, he perfectly embodies Jamie’s egotistical writer persona, and his emotion in the face of their breakup is touching.

The most effective moments of the piece are when the characters sing to an imaginary figure or extend their focus behind the camera, giving it a more naturalistic feel. When the actors sing to the camera, almost as if they are making eye contact with the viewer, it unfortunately feels as though you are watching an audition tape. Despite these slightly jarring moments, the footage is edited immaculately. It flows well, and plays with the social media style using split screens and innovative cutaways.

However, one of the major faults of this production is its sound quality. The piano is too loud, which not only makes it difficult to comprehend the lyrics being sung, but renders Brown’s melancholic composition clunky and discordant. What is more, it suffers from several avoidable and somewhat lazy blunders which give it quite an amateurish feel. When Jamie is on the phone, it is clear that there is no one on the call, and when he reads from his new book, it is hard to miss the cue card stuck onto the page. In any case, what novel has a picture of its author on the cover? For an £8 rental, I expect a slightly higher level of professionalism.

Samuels and Becker do succeed in their roles overall. They deliver the almost entirely sung-through musical with feeling and energy – I suspect the pair would be met with enthusiastic reviews if they were to perform it in an actual staged production. Their characterisation is impressive considering they were alone during filming, and their unsurprising lack of chemistry in this version could be easily combated with in-person rehearsals. All in all, The Last Five Years is an enjoyable and very admirable attempt at producing a lockdown musical, but I can’t help but hope that this virtual format does not become the new norm. 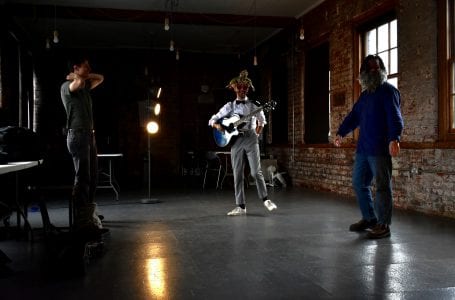 An Influencer In Lockdown: An Interview With...