Blast From The Past: (What’s the Story) Morning Glory // Oasis

‘The Trial of the Chicago 7’- A Missed Opportunity: Review

‘Ronnie’s’ Is A Timely And Stylish Celebration Of The Arts: Review

Three Reasons Why Interactive DVD Games Are Still Worth A Look

On her Facebook page C’est Karma describes herself as an “18 year old human being from Luxembourg making music for anyone who will listen.” The press release accompanying her new single ‘Fist Fight’ describes her as an “Alt-pop sorcerer” who “invites you into her fantastical world”.  Never one to turn down such an invitation, I stepped in to listen.

The natural reaction when listening to any new artist is to look for reference points to other artists. With the pulsing electronic beat of the opening bars and the deep vocals ‘Fist Fight’ immediately reminded me of Lorde circa Pure Heroine. It has the same poetic feel that the New Zealand singer-songwriter accomplishes with her music. Short sentences punctuated by the rhythmic music are effortlessly delivered as a meeting of spoken word and singing. The chorus does allow Karma to bring her singing voice more to the fore as we hear the Charli XCX influence in the delivery.

‘Fist Fight’ is the second single from Karma Catena who performs as C’est Karma. The song was born from the fact that the artist herself had never been in a fist fight but wanted to explore that theme. Karma describes it as being about “the conflicts everyone finds in themselves at some point in life, [it’s] about the fight between reason and instinct.”

‘Fist Fight’ feels very familiar. Karma says on her blog that she was influenced by both Lorde and Charli XCX for the way they “took popular music and put their twist on it, making it their own.” This feels like it has too much of a Lorde twist on it. Having said that, it still feels quirky and interesting enough, particularly when watching the video. After repeated listens I still found the tune catchy and the song engaging. ‘Fist Fight’ may not be the break through track for C’est Karma but I think there is enough here to justifying a listen and to watch what she does next. I have a feeling this is an artist who likes to experiment. 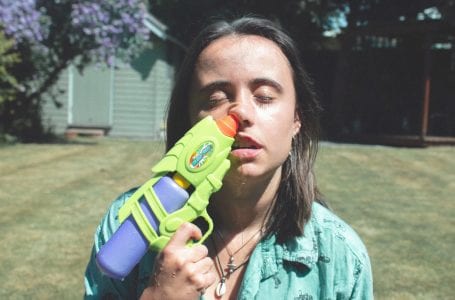 Track Review: Visitor // Of Monsters and...