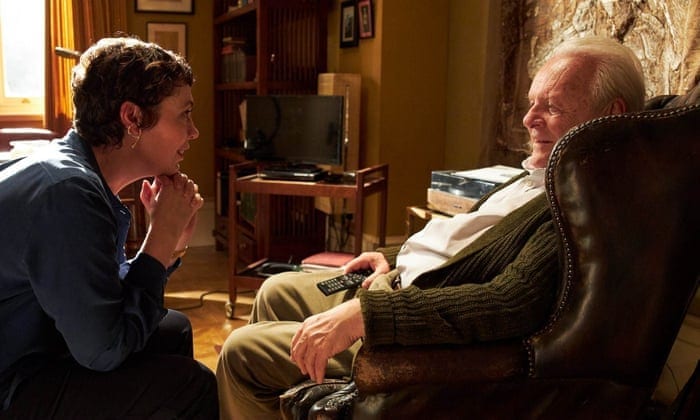 Based on Florian Zeller’s 2012 play La Père, the film stars acting royalty Anthony Hopkins and Olivia Colman (she was in The Crown, after all).

The Father sees Anthony Hopkins play (a handily named) Anthony, who is struggling with the harsh reality of ageing and serious memory loss caused by dementia, while Olivia Colman plays his daughter who moves in to help. The film already looks to be the classic Oscar contender; I, for one, can’t wait for the possibility of another iconic Colman speech.

It might not sound like the most dramatic of events, but the trailer tells a different story, throwing Mark Gatiss and Olivia Williams into the mix with practically zero obvious explanation as to who they are. Even more eerily, their characters seem to remain nameless, listed on IMDb as “The Man” and “The Woman”. Just a wild guess here, but they don’t seem like the good guys–at least not to Anthony, who seems confused and anxious by their presence.

With a run time of just 97 minutes, The Father looks like it wants to pull us into this world and keep us there. The challenge will be keeping our attention the whole way through, given the relatively short cast list and little plot explanation. But in a manner typical of possible Oscar contenders, this might be a way to mirror the intense experience of dementia, and how much can be forgotten over such little time.

With Florian Zeller directing and having co-written the screenplay with renowned playwright, screenwriter, translator and film director Christopher Hampton, The Father looks to be an adaptation true to its original. Perhaps this time the film will be just as good as the book?

Having premiered at the Sundance Film Festival in January earlier this year, the film is already critically-acclaimed. In fact, based on the 25 reviews on the site, The Father is rated 100% on Rotten Tomatoes. Whether its release in the US later this year and the UK early next year will change that remains to be seen… but I’m not exactly sure this is the kind of film you’d be running to the cinema to go watch with your dad.