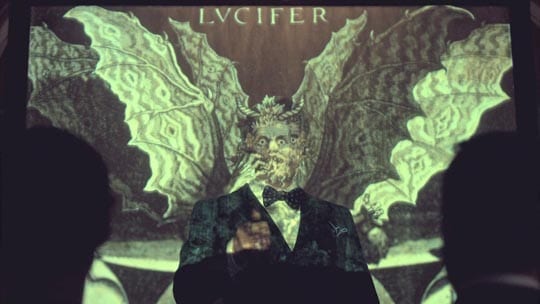 It’s been over a year since we last saw the devilishly delicious Hannibal on our screens, and in that year Bryan Fuller and co. have dropped numerous tasty morsels to wet our appetite. For those of us desperate to find out the final fate of our beloved Will Graham and crew, it appears we’re going to have to sit tight for another week before secrets – and maybe even blood – are spilled. But have no fear- our first taste of the long-anticipated third season is just as spectacular as we’ve all grown to expect.

“Let it be a fairytale, then.”

Leather clad and straddling the most well-kept motorbike you’ve ever seen, it’s obvious that this is a Hannibal we’ve not seen before. Much like a snake that sheds its skin to adapt and change, the Doctor can mould to fit any situation  he finds himself in; in this case, the illuminated streets of Paris. He somehow manages to hunt his prey with both extreme precision and wild sophistication, leaving us (rather worryingly) wishing we could hop on the back of that bike and escape into the darkness of the Parisian night.

Gillian Anderson returns to the much more central role of Dr. Bedelia DuMaurier, and we’re finally given an insight into just how deep-rooted her relationship with Hannibal lies. He saved her from the prying eye of the FBI after a deadly run-in with a deranged past patient (watch out for a very open-mouthed cameo from Zachary Quinto), and her ‘professional curiosity’ provided Hannibal with a means of starting anew in Europe. The relationship that plays out between them is clearly one of interdependence, but it’s never quite obvious who is playing who. Whilst Bedelia attempts to cling on to her last clutches of control, Hannibal makes it clear that simply observing is no longer a feasible option- she must become an active participant.

After assuming the identity of Doctor Fell and filling the position of curator and translator at the Palazzo Capponi, Hannibal is free to relish in the glory of art, heaven, and the devil himself. There’s plenty to tickle the fancy of die-hard Thomas Harris fans, including a recital of Dante’s first sonnet. Yet the show still manages to provide a refreshing take on such a beloved series, with thanks to the ever superb Mads Mikkelsen. He somehow manages to give the character an undeniably human touch, ultimately serving to make his murderous rampages all the more terrifying. This is a show that knows what works, and boy do they run with it.

Old faces and new faces come and go, as to be expected in a show about a man who eats people. Antony Dimmond provides a touch of humour (“is it that kind of party?”) during times when the narrative can get a bit muddled, but nothing is ever stretched too far.

“You really are the devil.”

Of course, it wouldn’t be Hannibal without the simply stunning cinematography that has become so integral to the show. Whether it’s explosive champagne, a bathtub of horror, or snails feasting on a human arm (poor Gideon), no aesthetic stone is left unturned here. A particular standout moment occurs when, under the premise of being Dr Fell, Hannibal stands before a projected image of Lucifer. With their faces perfectly aligned, one thing becomes abundantly clear- the devil really is in the details.

He may have taken off his person suit, but now that he’s stripped back for the world to see, how long can Hannibal survive?