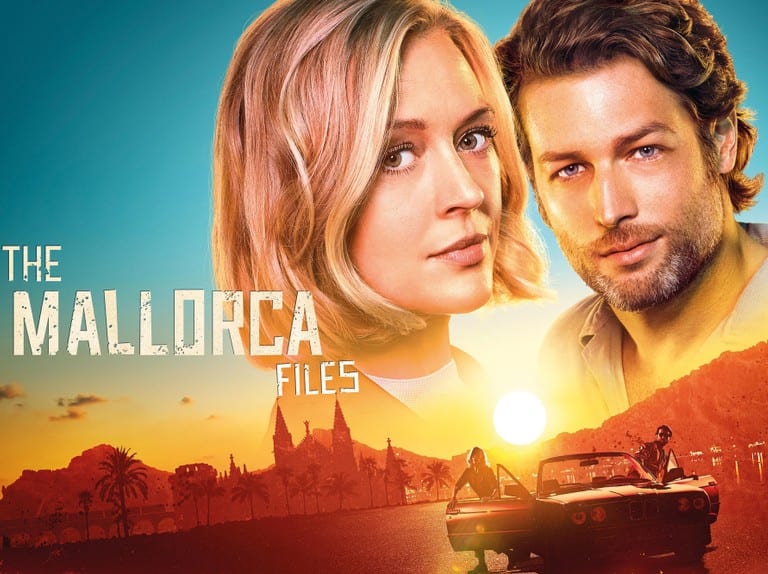 February is a perpetually dark, damp month for those of us in the northern hemisphere and is therefore the perfect time for a bit of warm weather escapism. The second series of The Mallorca Files certainly delivers on this desire and bursts across our daytime viewing schedule like a ray of much-needed sunshine.

This feel-good buddy cop show follows uptight British Detective Miranda Blake (Elen Rhys) – exiled to Mallorca after a case gone wrong – and her new partner in the Palma Police force, German Detective Max Winter (Julian Looman). Their unexpected – and unwanted – partnership gets off to a rocky start at the beginning of the first series; by-the-book Miranda is constantly frustrated by Max, who is the complete opposite of every serious, studious German stereotype and is so laid back that he’s practically horizontal. However, as Miranda acclimatises to the way things are done on the island, the two begin to work together more effectively and end the series as firm friends and capable partners.

With the tone of the show firmly established by the upbeat guitar strains of its cheery theme tune, The Mallorca Files provides easy afternoon viewing with its own take on the classic trope of opposite personalities forced to work together. A tried and tested combination that never fails to entertain, the show succeeds wholeheartedly in the case of Max and Miranda. Though many a comparison has been made to its Caribbean cousin Death in Paradise, The Mallorca Files is much more carefree in tone and style whilst still possessing just the right amount of gravitas to keep the viewer engaged in the plot.

The second series hit our screens last week, and saw the compañeros tackle new cases, including the murder of an opera singer, the suspected poisoning of a British food critic, and death threats made against Real Mallorca’s star football player. New characters are introduced in the form of heavy metal enthusiast and pathologist Roberto Herrero, who declares upon Max and Miranda meeting his new perky, heely-wearing assistant Luisa, that “either we will fall madly in love, or I will kill her”, in one of the most comical scenes of the series. María Fernández Ache reprises her role as Inés Villegas – the stylish, stiletto-clad Chief of Police – who is as sarcastic and demanding as ever. Every investigation features action, drama, and unexpected twists – all neatly wrapped up in 45 minutes – and although it presents as a perfectly satisfying daytime police procedural, the show’s real draw is the sizzling dynamic between its two main characters.

The flirty banter between Max and Miranda is both entertaining and addictive to watch. The will-they-won’t-they element of their relationship keeps the viewer hooked, as does the blatant undercurrent of sexual tension carried over from the first series (that paso doble, damn). Though mellowing to a slower burn in the second series, the subtler way their partnership is filmed adds depth rather than giving the impression the spark has fizzled out. The camera cleverly films the two in sweeping, slow-motion 360-degree shots, catching the looks they throw each other against the backdrop of the romantic Spanish sun. It’s these lingering glances and examples of non-verbal communication – whether a stylistic choice or a consequence of having to film during a pandemic – that shows the strengthening of their relationship and its possibilities for the future. Apart from a few strange scenes involving some stilted pats on the back performed at arm-length, the impact of coronavirus on filming is barely felt at all, which really ramps up the escapist element of the show.

It’s not just their relationship, however, that is beautifully shot. The warmth of the show’s setting isn’t something we the viewer can feel physically, but the saturated tones, burning sunsets, and classic Iberian terracotta colour palette make it easy to imagine. Filmed completely on Mallorca, the scenes in and around its urban areas showcase the island in a way many may never have seen before. Gone are the tourist resorts and sandy beaches, and instead we are treated to its historic colonial architecture, cobbled old-town markets, and winding mountain roads. The drone shots of Max and Miranda speeding through the scenic countryside in Max’s classic open-top BMW, sunglasses on, and the wind in their hair, is a study in the simple pleasures of life many have missed out on over the last year. As a result, I suspect The Mallorca Files is doing more for the future tourism of the island than any ‘Visit Majorca’ advert ever could.

At its core, The Mallorca Files is a light-hearted, easy-to-watch crime drama that doesn’t compensate for its cheery atmosphere by scrimping on the action. The easy-going tone provides a welcome break from the darker, grittier urban crime dramas that have been prevalent on our TVs in recent years, and therefore makes it ideal for lazy afternoon (or weekend) viewing while we dream of our own sunny escapes in a post-Covid world.

Series 2 of The Mallorca Files is airing every weekday at 1:45pm (GMT) on BBC1, with both series available to view in full on BBC iPlayer.