How To Keep Your COVID-19 Distanced Relationship Alive

A new report from UN Women shows that COVID-19 has widened the gap between male and female unpaid domestic labour. As positive news about the Pfizer vaccine circulates and the UK looks set to move out of COVID-19’s dark shadow at long last, we cannot let the Coronavirus reduce some of the strides women have made towards equality in the last few decades.

Journalist and author Caitlin Moran talks about ‘The Stair System’ in her latest book, More Than A Woman, perfectly summarising the additional work that many women – mothers in particular – undertake in the home: 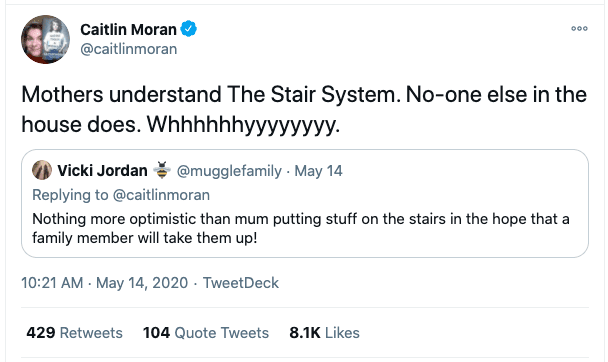 What’s woefully clear from the replies to this tweet is that there’s always been a gender imbalance when it comes to unpaid domestic labour and that hasn’t really changed, since, well, long before “a woman’s place is in the kitchen” jokes were invented. Pre-pandemic, women spent about three times as many hours on unpaid domestic and care work as men; but this rift has only widened in 2020, no thanks to Miss Rona.

According to the ONS, during the first weeks of the UK lockdown (28 March to 26 April 2020), women were carrying out on average two-thirds more of the childcare duties per day than men  in households with children aged under 18. The UN Women survey reveals this to be a pattern echoed across the world: research conducted by Ipsos on the organisation’s behalf revealed that before COVID-19, the average time spent on childcare by women was approximately 26 hours per week. It’s now closer to 31 hours a week. Men, on the other hand, reported spending approximately 20 hours per week on childcare before the crisis, which has since increased to 24 hours. On average, then, women have added an extra 5.2 hours on average per week for childcare, compared to 3.5 extra hours for men, with the gender gap varying widely across countries. This means that in most countries women are spending 30+ hours per week solely on childcare – almost equivalent to the average time spent at a full-time job per week.

Many women face an impossible double burden: trying to keep their jobs and sources of income while dealing with rising unpaid care and domestic work demands. At this point it’s pretty much common knowledge that the Coronavirus pandemic has disproportionately affected women; us women have borne the brunt of COVID-19 earnings penalties on top of the existing gender pay gap. More women work in sectors where there have been redundancies or employers taking advantage of the furlough scheme, so the UN Women findings are, perhaps, unsurprising. The report revealed that although both women and men are bearing the increased burden of household chores and other domestic work in light of COVID-19, 60% of women reported that they have increased the amount of time they spend on unpaid domestic work since the pandemic began, compared to 54% of men. For 28% of women, the intensity of their domestic work has increased compared to 16% of men who feel that there’s been an increase in the intensity of their unpaid domestic workload.

Although the news that the Pfizer vaccine has been approved for use in the UK from next week is a welcome story, we cannot move past the COVID-19 crisis without addressing the systemic social inequalities that the pandemic has exposed. Without decisive action, there is a real danger that the COVID-19 pandemic will erase the important but fragile progress that women have made over the past few decades. So, in order to prevent a global step backwards for equality, there are a range of measures which need to be adopted. These include policy changes as well as fiscal measures such as the increased tailoring of economic support packages to women.

The biggest change needs to be the adequate remuneration of care workers. Every day, 16.4 billion hours are spent on unpaid care work – that’s the equivalent of 2 billion people working 8 hours per day without pay. The actual value of this work amounts to 9% of global GDP (equivalent to USD 11 trillion). At the moment, the UK Carer’s Allowance is just £67.25 a week, and is only available for those who care for someone at least 35 hours a week. Nor does the allowance increase if you care for more than one person, which beggars belief. Reducing the threshold so that women (and men) doing 30+ hours a week of care a week could access the support would be a start; introducing different levels of support depending on the number of dependents you have would be better still.

Secondly, governments around the world need to adopt policies that support access to childcare services and recognize these as essential. The UK is woefully behind on childcare; see Sophie McBain’s brilliant piece for New Statesman where she writes: “Even though nursery staff are among the lowest-paid workers in the UK, British parents face the highest childcare costs in the OECD [Organisation de Coopération et de Développement Économiques]. The average UK family spends over a third of their earnings on childcare; in France this figure is only 4 per cent.” So i) care workers should be paid more and ii) British taxpayers should pay less to access these fundamental services, in doing so reducing the burden on women (and men) to provide early-years and after-school care for children.

Governments also need to extend paid family and sick leave. Additionally, they need to put pressure on employers to introduce flexible working arrangements that accommodate our ‘new normal’ – for instance, allowing employees to ‘make up’ hours in the evenings or weekends when they have been distracted by providing childcare during the day to dependents who may be at home from school due to COVID-19 exposure.

It’s also worth considering “cash-for-care” programmes that compensate parents during school or day-care closures; this could be a temporary relief while schools and nurseries continue to be affected by local outbreaks, forcing kids and toddlers to stay at home. The Norwegian cash-for-care benefit scheme sees parents receive 100% cash-for-care benefit if your child does not attend a full-time state kindergarten – implementing something similar in the UK would mean that all those hours of unpaid work that Mums and Dads do would finally be fairly compensated.

These policy and funding changes need to come from the top down, but there are things that we can all do in our own lives to more fairly share the domestic load. We can talk to each other, make sure we’re having regular conversations about what is and isn’t working in our day-today routines. Rather than leaving passive aggressive post-it notes, ask your partner to make more of an effort to empty the dishwasher/put the laundry away/get the kids ready for bed. If you’ve found yourself living at home then ask if there are any chores you can do around the house to reduce the burden on your parents (and, realistically, your Mum). If you’re a man who already thinks he does a decent amount to help out, ask your partner whether they feel there are any areas where you’re slacking (let’s face it, there will be something). And, for the love of god, next time you see something sitting on the stairs, just take it up with you!