Every story has a hero and a villain. A cop and a robber. A painter and a thief. Benjamin Ree’s genre-bending documentary transcends that narrative, presenting us not with a protagonist/ antagonist tale but with a real-to-life story of crime, repercussions and the complexity of the human spirit.

The film opens in the aftermath of drug-fuelled art robbery. Oslo-based painter, Barbora Kysilkova, has two of her life-like oil paintings stolen from a gallery display while they are on exhibition. The police quickly discover the heist’s ringleader, Karl-Bertil Nordland, but are unable to discover the location of the paintings. In a shocking display of compassion, Barbora, during the court hearings for the crime, quietly speaks to the thief, asking if she can paint him. The story then tracks the evolution of Barbora and Karl-Bertil’s intense friendship, as the two become intertwined in each other’s lives, helping each other find purpose and meaning.

At the start of the film, we don’t know anything about Barbora and her work, nor do we quite understand why she has so much empathy for the person who has robbed her of her livelihood. But over the course of 100 minutes, we come to know everything about these two peoples’ souls. We are given completely unfiltered access to the minds, emotions, dreams and heartaches of these people. We follow them through possibly some of the lowest points in their life, all in front of the backdrop of two artists’ passions. 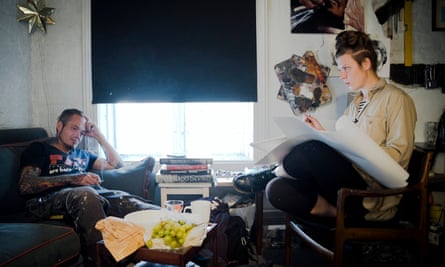 The vulnerability that is given by the film’s subjects is baffling. They allow us to see parts of their lives and identities that aren’t even seen in “reality” programmes. The film is fuelled by its emotional passion – both for the art and for each other. It’s rewarding – and perhaps a bit disconcerting considering the world we are living in now – to see nothing but pure love and compassion presented by these two beings. The film is truly just an examination of life: despite the focus being on a series of extraordinary events, the narrative hinges on the audience’s acceptance of the redemption of man.

Ree presents a film that almost feels like fiction – it’s not stylised like a documentary, nor does it follow the typical documentary-storytelling conventions. The film is mostly non-linear, going back and forth in time and space. The chronology of the story does cause the film to be muddled and difficult to follow, making you question where and when in time we are and how long the story has been. But it also allows you to become submerged in the concept of art and creation, driving home the importance of art in everyone’s life.

At its core, The Painter and the Thief is a beautiful exploration of humanity, asking us to challenge our predetermined biases and find compassion, even in the smallest of places. It provides you with two contrasting perspectives, something rarely seen in this perception-focused genre, highlighting the intricacies and complexities of human nature. The film leaves you asking who is our painter and our thief – because, perhaps, they’re the same person.